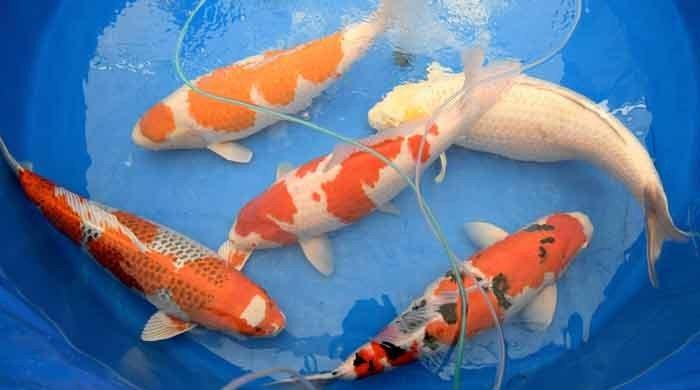 Kazuo, Japan: Hand-raised for its color and beauty, a carp has become a prominent symbol of Japan that can sell for hundreds of thousands of dollars and even compete in fishing competitions.

A nation’s carp caught the world’s attention when a visitor to US President Donald Trump was carelessly thrown the last box of feed into a pond in a Tokyo palace.

But the fish has been popular in Japan for decades, where most breeders take their most valuable specimens (called “nishkegui”) to a highly competitive “beauty parade”.

In one such contest in Tokyo, the judges stood in a pedestrian alley with sharp suits, notebooks in hand, tanks, and valuables.

They come in all the colors of the rainbow: pearl white, bright red, cloudy brown, dark blue, bright golden yellow.

But it’s the fish’s turn that makes up 60 percent of the final score, explained competition organizer Osamu Hatori, who runs Japan’s main association for carp breeders.

Colors and contrast make up another 30 percent, he told AFP.

And the last 10%? “Hanako” – a concept that is difficult to explain and difficult to judge, best translated as “presence” or “shine” of the fish.

“InkHinkaku´. It is either present in the genes at birth, or it is not,” said Mused Mikinori Kurikara, a breeder in Sitama, north of Tokyo. Can see in fish. Nine months

On its farm, thousands of small “nashkegoi” (colored carp) carefully circle around deep basins of clear water, carefully divided by age and color.

A less fortunate one is waiting for someone else who is not lucky enough to catch the breeder’s eye: they are sold as food for tropical fish.

“It’s a really delicate job, really difficult. Everything is important: the land, the quality of the water, the food, the fine arts of no breeding.

“We have a lot of secrets,” he says mischievously. “But even if we let them slip, it won’t work. You have to be able to feel it.”

These days, in any proud traditional Japanese garden, plenty of colorful people decorate their ponds, but this is a relatively recent tradition.

About 200 years ago, villagers in the mountainous region around Niigata (northwestern Japan) began practicing genetic engineering to see what they were doing.

For the first time, they began to breed rare colored carp not for food but for pure aesthetic value.

Nishikegui’s madness gradually engulfed the whole of Japan and then spread to other parts of Asia.

They are especially popular in China, where carp swimming against the tide symbolizes the idea of ​​perseverance that leads to wealth – as people climb the social ladder, says Utaka, a professor at the Institute for Advanced Studies at the University of Tokyo. Suga said.

Today, there is no big business and Japanese exports are booming – 90% of domestic production is exported and sold at auction.

As for individual carp, “prices have gone crazy,” said Hattori, boss of the carp association.

Like racehorse owners, many foreign owners leave their valuables on their home Japanese farms to compete with highly prized fish, which are only open to domestic breeding.

One such owner, Chinese collector Yuan Jiandong, was in Tokyo to cheer on some of his carp.

“It’s not a way to make money. It’s a way to spend for fun,” said the Shanghai pharmaceutical owner with a laugh.

He said that owning someone is more than a futile display of wealth.

“When you see these beautiful fish swimming in your pond, you forget the stress of everyday life and you get peace of mind.”

And you can’t put a price on it.