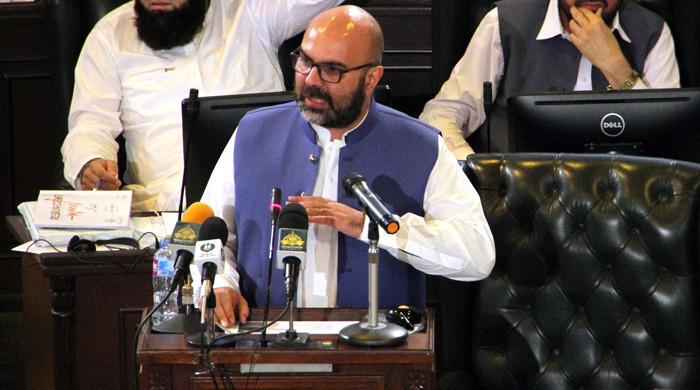 PESHAWAR: The PTI-led Khyber Pakhtunkhwa government on Friday presented a budget of Rs 118.3 billion for the financial year 2021-22.

Presenting the third budget of the PTI-led government in the Khyber Pakhtunkhwa Assembly, Finance Minister Timur Saleem Jhagra said that a record Rs 371 billion had been allocated for the Annual Development Program (ADP) and Rs 747.3 billion for the current budget expenditure. Have gone

The minister announced a record 37% increase in the salaries of all employees who do not receive special allowances from the government.

Jhagra said Rs. 919 billion has been earmarked for settled districts and Rs. 199.3 billion for the development of integrated tribal districts.

Similarly, Rs. 648.3 billion has been allocated for settled districts and Rs. 99 billion for integrated districts.

The Minister said that the current budget is based on five pillars – record increase in salaries of government employees, development budget, dedicated services to the people, increase in KP resource revenue, and targeted reforms and innovation in the overall system of governance. Introduction to

He said that two “innovative approaches” – “Development Plus Budget” and “Service Delivery Budget” were being introduced under which Rs 500 billion would be spent on the former, which would include mega projects like Health Plus Cards, Provision of furniture to government schools, and increase in the budget for medicines in public sector hospitals, while Rs 424 billion will be spent later with the priority of paying the salaries of doctors, nurses and teachers, supply of medicines to hospitals and rescue. In addition to supplying fuel to 1122 ambulances.

Regarding revenue and earnings during 2021-22, the Minister said that a revenue and revenue target of Rs. 1,018 billion has been set for the next financial year which will be achieved from various financial resources, duties and taxes.

Regarding the details of the expenditure budget during the financial year 2021-22, the Minister said that a total of Rs 374 billion would be spent on salaries, including Rs 60 billion in integrated areas and Rs 314 billion in populated districts.

Similarly, Rs 92.1 billion will be used for pension payments, including Rs 1.0 billion for integrated areas and Rs 92 billion for settled districts.

Apart from salaries, Rs 203.9 billion will be spent on operation and maintenance expenses, emergencies and district expenses. Rs 38.9 billion and Rs 164.9 billion for integrated areas while Rs 74.4 billion for other existing expenditure.

Salaries of all government employees are being increased except those who did not get special allowance including 20% ​​increase in functional or sectoral allowance, 10% increase in ad hoc relief allowance, 7% increase in house rent of these employees. Don’t take advantage of the scheme.

To control the cost of pensions, he said, two proposals – raising the upper age limit for government employees, ie 55 years premature retirement or completing 25 years of service – are being considered at a cost of Rs 12 billion per annum. It will save Rs.

Similarly, Rs 1 billion will be saved from changes in the annual pension laws under which widows, children and parents of deceased employees will be entitled to pension benefits.

The Minister announced that the minimum wage of laborers and daily laborers is being fixed at Rs. 21,000.

The finance minister announced a 100 per cent increase in widows’ pensions from 75 per cent earlier.

Property tax rates have been further reduced to provide archives, libraries and hostel facilities for higher education students in addition to those who pay regular taxes, and free admission to students wishing to enroll in primary and secondary government schools. Giving has been announced.