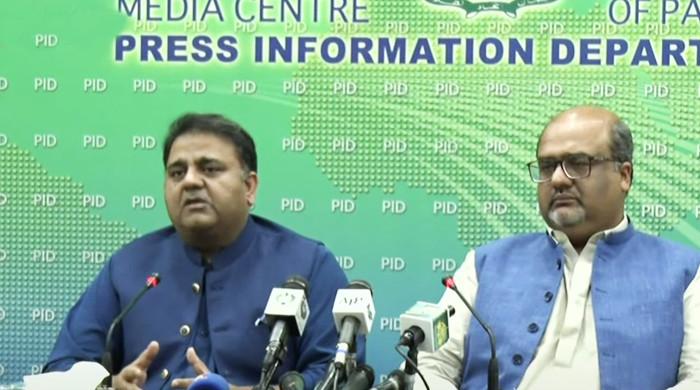 Addressing a press conference in Islamabad along with Shehzad Akbar, Advisor to the Prime Minister on Home Affairs and Accountability, the minister said that Nawaz’s meeting with Mohib had damaged the security ideology of Islamabad as the man had earlier been anti-Pakistan. Comments were issued.

Fawad said Indian Prime Minister Narendra Modi – who has repeatedly harassed Muslims in the country – has ties to the Afghan official who met Nawaz.

“When two or three people who have started following Modi’s extremist ideology meet Nawaz, then in this constituency [getting together] “Questions arise and our security ideology is damaged,” he said.

In the eastern province of Nangarhar, two months ago, along the Pakistani border, in a public speech, Mohib not only reiterated his allegations about Islamabad, which “does not want to work with any Pashtun leader in Afghanistan.” Rather, Pakistan was called a “room house”.

His remarks infuriated leaders in Islamabad, who condemned him as “violating all principles of interfaith communication”.

Fawad said in today’s briefing that he was “surprised” that Nawaz had met with the Afghan delegation and countered that Mohib and Afghan Vice President Amrullah Saleh did not have much involvement in his country.

Fawad said in today’s briefing that he was “surprised” that Nawaz had met with the Afghan delegation and countered that Mohib and Afghan Vice President Amrullah Saleh did not have much in their country.

“Defaming Pakistan is a ploy of Amrullah Saleh […] We have also made it clear that Pakistan will not hold talks with Afghanistan’s National Security Adviser [Mohib], “They said.

He said Islamabad had cut ties with his office when the Afghan official issued anti-Pakistan remarks in May.

The Information Minister said that he could not repeat the words used by Mohib for Pakistan, and also stressed that Islamabad stands with the people of Afghanistan and not with any selected group.

The Minister said that Pakistan has always wanted a peaceful Afghanistan and has always helped its Afghan brothers in difficult times. “We want a government in Afghanistan that is acceptable to all groups.”

He said that Nawaz had a history of controversial meetings, adding that Pakistan was already facing a lot of disputes on the diplomatic front.

However, he reiterated that Pakistan has always wanted good relations with India and still does.

Returning to Nawaz’s meeting with Mohib, he said that the PML-N should issue an explanation on the issue.

Fawad asked the PML-N leadership if their party supremo had informed them before the meeting. “Did he also inform the PML-N Central Executive Committee?” He asked.

“Let the PML-N tell the people whether the party’s CEC was informed about the meeting or not,” he said, adding that Nawaz had met a man whose “India The relationship with was no secret.

He demanded that audio transcripts of Nawaz’s meeting be made public.

The minister said that the details of Nawaz Sharif’s meeting with Indian tycoon Sajin Jundal have not come to light yet. In his book, Indian journalist Barkha Dutt writes that Nawaz had informed Modi through Jundal that the army was on his way.