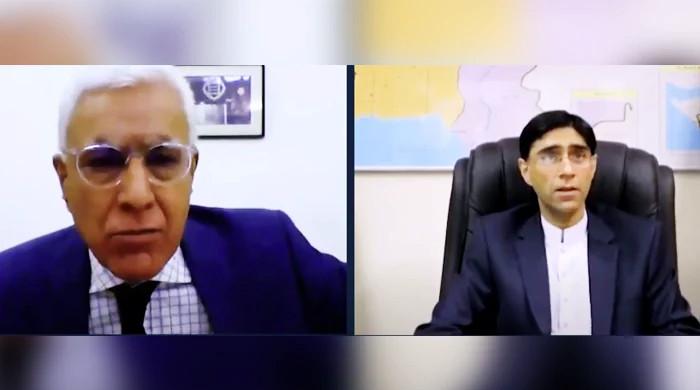 National Security Adviser Moeed Yousuf told Indian journalist Kiran Thapar on Saturday that Pakistan would not start talks with India until it withdraws unilateral and aggressive measures in occupied Kashmir.

Yousuf said the question of whether Islamabad could ever expect respectful relations with the Modi-led Hindutva government in India was raised during an interview. the wire.

He said that India would not resume diplomatic relations with India unless it was ready to resolve the Kashmir issue in accordance with UN resolutions.

Reiterating Pakistan’s unanimous stance on the region, the National Security Adviser said, “We have made it clear to India that we will stand by the Kashmiris till the end.”

At one point in the interview, Yusuf dropped the slap after asking, because Prime Minister Narendra Modi is called Adolf Hitler in his own country.

The NSA told the reporter that there was evidence of Indian mismanagement in the region and informed them that there were clear links to Indian involvement in the Lahore blast – which killed three people and injured dozens.

In the aftermath of the June 23 incident, Foreign Minister Shah Mehmood Qureshi, when asked to comment on New Delhi’s involvement in the Lahore blasts, said that India was sponsoring terrorism in Pakistan. Trying to divert attention from matters.

The Foreign Minister is addressing Geo News The Geo Pakistan program said Pakistan would tell the world how India was financing terrorism in other countries.

The NSA said that the BJP-led government in India was working on a fascist agenda. “Pakistan has always wanted peace, but Hindutva ideology has always been an obstacle to achieving it.”

Jaishankar of India admitted last week that Pakistan was on the FATF’s gray list because of “the efforts of Narendra Modi’s government”.

According to a published report PrintThe Indian foreign minister praised the Modi-led government for its “efforts” to ensure that the FATF put Pakistan on the gray list.

Talking about Afghanistan, Yousuf said that Pakistan was looking for a political solution to resolve the differences in the war-torn country.

At the end of the interview, Yousuf lamented the coronary situation in India and invited Thapar to visit Pakistan.