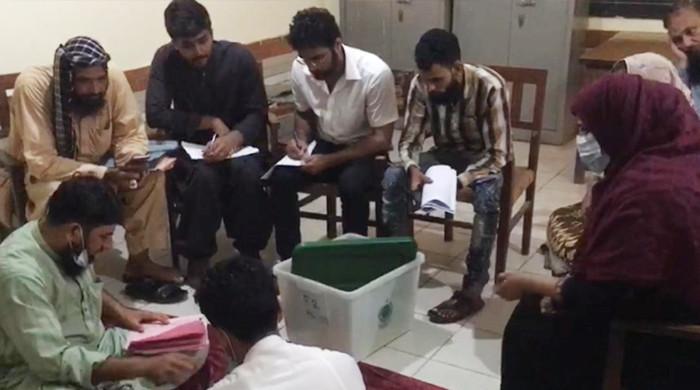 Polling for the Azad Jammu and Kashmir (AJK) Legislative Assembly elections ended at 5pm on Sunday, with the process escalating into violence in which two people were killed in clashes between the parties. ۔

He said that the turnout in the Azad Jammu and Kashmir elections showed that the people have shown great interest in casting their vote and they have expressed full confidence in the polling exercise.

“Inshallah, Imran Khan’s government in JJ will be a source of strength for the people of Occupied Kashmir,” he said.

In parallel, opposition parties have criticized the PTI-led government for “rigging” the election.

PPP vice-president Senator Sherry Rehman accused the Center of “systematic rigging” and said it was trying to “steal” the election.

The PPP leader alleged that PTI workers had opened fire on the PPP worker’s car during the polling, while police had uprooted the camp belonging to his party.

“There is a clear difference in the voter lists of many polling stations […] He said that PPP has lodged a written complaint with the Election Commission of Azad Jammu.

Meanwhile, PML-N spokesperson Maryam Aurangzeb claimed in a statement that PTI “goons” had attacked her party workers in Alipur Chatha area of ​​Gujranwala for “rigging” the election.

“The PTI has been allowed to engage in bullying with complete freedom,” he alleged.

“Complaints of violence and fraud do not meet the criteria for transparent elections,” he added.

Aurangzeb had earlier pointed out that he had been informed of “irregularities” from various quarters.

“Women voters are being insulted,” he added, claiming that there were reports of ballots being sealed inside polling stations with the help of staff.

He further claimed that no polling agent was allowed to enter LA-32 Chakar, LA-33 Goharabad except PTI.

“The tactics of the 2018 and Daska elections are being openly repeated,” Maryam said. He added: “Imran Sahib will be responsible if any untoward situation arises,” he said.

Of the highly sensitive polling stations, 168 were in Muzaffarabad, 312 in Poonch and 424 in Mirpur.

Azad Jammu and Kashmir has a total electorate of 3.2 million, of which 1.75 million are men and 1.46 million are women.

A total of 691 candidates, including 381 from 311 registered political parties and 310 independent candidates, are contesting for the 45 seats.

The elections are being held under the supervision of the judiciary of Azad Jammu and Kashmir, Pakistan Army and Rangers in coordination with local civil law enforcement agencies.