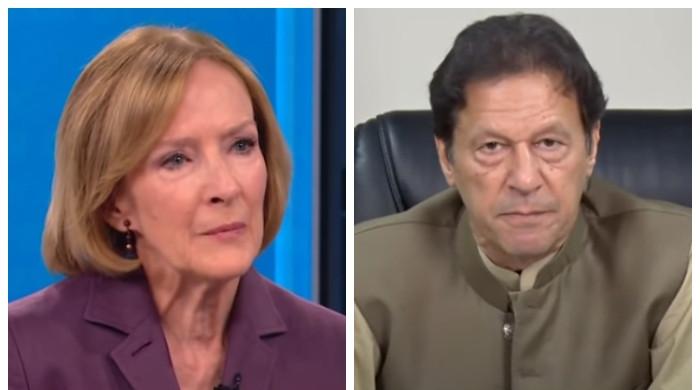 After his comments on rape came under fire, Prime Minister Imran Khan said on Wednesday that he would “never say such stupid things” where the victim of the crime against him “somehow”. Is responsible.

In an interview with PBS News HourPrime Minister Imran Khan was asked about his remarks, which show that the person who is abused is in some way responsible for the crime.

“Anyone who commits rape is responsible for that person alone. So let’s be clear about that. No matter how provocative a woman is or whatever she wears, the person who commits incest is fully responsible. The victim is never responsible, “Khan said as soon as he asked the question.

The prime minister told interviewer Judy Woodruff that his comments had been taken “completely” out of context.

“He was just talking about Pakistani society where we are witnessing a sharp rise in sexual crimes,” the prime minister explained. He also said that sex crimes do not only involve women.

“More children are abused than abused [cases] Those who are passing through the roof, so my comments were in this context, “said Prime Minister Khan.

The prime minister said he had used the word “veil”, adding that the word did not mean only clothes or was limited to women. He said that the “veil” is also for men and means “to create strife in society”.

“And I have to say that because I know all the interviews I’ve given. I would never say such a stupid thing where a rape victim is somehow responsible. It is always responsible for abuse.

‘Pakistani women treated with more respect than anywhere else ‘

Woodruff also asked the prime minister if the importance of Islam in Pakistan prevented him from taking a hard line on women.

“Of course not. Islam gives dignity [and] Respect women, “the Prime Minister said in response to his question. He added that after traveling around the world, he found that women are more respected in Muslim countries.

In Pakistan, even in other Muslim countries, I have seen women [are] He was treated with more respect and given more dignity, ”said Prime Minister Khan.

Rape in Pakistan compared to the West

Talking about respect for women, the Prime Minister acknowledged that there are “strange cases” but said that such a situation exists “everywhere in the world”.

The Prime Minister said, “But if you still look at the situation in Pakistan, I mean look at the incidents of rape here, they are less than in the West.”

The Prime Minister acknowledged that there were problems in Pakistan but linked them to “cultural issues”. He further added that such cultural issues exist in every nation and are solved with cultural evolution.

As far as the dignity and respect of women goes, I can say this after going all over the world [Pakistani] Society gives more respect and dignity to women.

Controversial remarks by the Prime Minister

Last month, after an interview with Axis’ Jonathan Swann, Prime Minister Imran Khan fired his remarks on the rising incidence of sexual violence in Pakistan.

However, the Prime Minister’s remarks on sedition and women’s dressing went viral on social media.

Referring to the Prime Minister’s earlier statements on pornography that caused a backlash on social media, Swann asked:

“On the rise of pornography, you said it would have consequences, and you were accused of rape. How would you respond?”

In response, the prime minister defended the criticism, saying “this is nonsense.”

He added, “So this is a very different society, there is a way of living here. So, if you bring sedition to this point in society, and all these young boys have no place, It has consequences for society as well. “

“What do you think women wear – they’re part of a temptation?” Asked Swan.

“Yes, but will it really provoke sexual violence?” Asked Swan.

“It depends on what society you live in,” Prime Minister Imran Khan replied. “If in a society, people have not seen this, it will affect them,” he added.