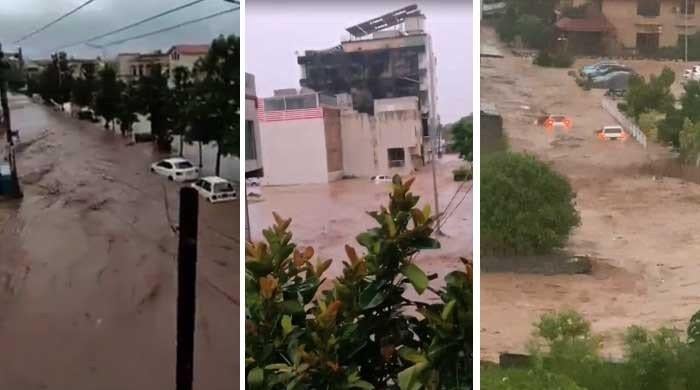 ISLAMABAD: At least two people were killed in floods caused by cloudburst in Islamabad Wednesday.

Deputy Commissioner Muhammad Hamza Shafqat said in a message on Twitter that the cloudburst in Islamabad had caused floods in various areas, a statement contrary to the Met Office.

Heavy rains in the federal capital claimed lives when more than 300 mm of rain fell in a few hours.

Videos in Islamabad’s Sector E-11 and D-12 show cars floating in floodwaters after heavy rains, causing hours of torrential rain in the federal capital and Rawalpindi.

The Twin Cities received the heaviest rainfall during the current monsoon season.

Soldiers were called in to help

Pakistan Army troops were deployed in Rawalpindi when the local government sought the help of the army after heavy rains caused by a flash flood in Naal Lai.

Inter-Services Public Relations said in a statement: “Due to heavy rains, the water level in Naal Lai has risen and water has accumulated in E11.

It said troops were busy assisting the civilian administration in rescue and relief operations.

“Emergency plans are in place to deal with any flood situation.”

Earlier, a spokesman for the National Disaster Management Authority (NDMA) said that the local administration and emergency services had been alerted to deal with any emergency situation due to heavy rains and possible flooding in Nala Lai in Rawalpindi.

Two members of a family drowned in Sector E-11

According to Geo News, two people, including a minor, were killed when water entered their houses in Sector E-11 of Islamabad.

According to the victim’s family, four children and their mother drowned when a nearby drain overflowed and water entered their home.

He said that the administration rescued three children while one child and mother died.

An uncle of the deceased child told Geo News that water entered his house at around 6am, causing a wall in the backyard to collapse.

“Water accumulated in the basement of the house, five members of the family, including four children, drowned.”

He said that they started the rescue operation on their own while the administration reached the area after 8:30 am.

The E-11 is not controlled by the CDA

Meanwhile, sources said Geo News The flood situation in Sector E-11 was due to poor management of a housing society.

“They do not have the machinery to deal with the flood situation,” the source said.

He said that CDA administration has started drainage work from the area.