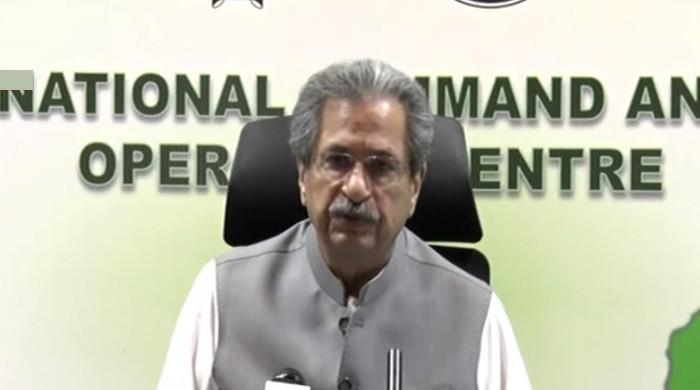 Federal Minister for Education Shafqat Mehmood on Wednesday said that the Inter-Provincial Education Ministers Conference (IPEMC) has decided to keep educational institutions open across the country except Sindh.

Mahmood said that Sindh Education Minister Saeed Ghani had informed IPEMC that schools in the province would remain closed till August 8. .

The education minister’s press conference came after chairing a meeting of the IPEMC to review the latest corona virus situation, closures and school reopening.

On the other hand, Punjab, Gilgit-Baltistan, Azad Jammu and Kashmir, Balochistan and Khyber Pakhtunkhwa have decided to reopen schools with 50 per cent attendance.

– Opening schools in a messy manner.

– 50% attendance should be observed.

– Universities, colleges should be opened without any restriction.

– Sindh will announce the timetable later.

– Students will get 5% extra marks in exams.

Mahmood said the IPEMC had decided to reopen universities and colleges without any restrictions, but participants in the meeting expressed concern over the corona virus situation in higher education institutions.

Mahmoud said education ministers have been urged to make special efforts to recruit university students as they are over 18 years old and teachers have been vaccinated.

The Education Minister said that in this regard, it is important that transport personnel be vaccinated and a deadline of August 31 has already been set for them.

Mahmood said that all the examinations would continue as per the schedule while changes would be made in the timetable of Sindh. “Class 9, 10, 11 and 12 exams will be according to their date sheet.”

Highlighting another important decision, he said that IPEMC has decided to conduct examinations only for elective subjects, and the marks obtained in them will be allocated proportionally for the compulsory subjects.

He said that IPEMC has decided that students will be given 5% extra marks in examinations as according to research students get better marks in compulsory subjects.

“The next meeting on education will be with the National Command and Operations Center on August 25. Until then, these decisions will remain in place,” Mahmood said.

For now, I urge students not to pay attention to the news on social media as there are many rumors, he added, adding that the Ministry of Education will announce the authentic news.

“Everything we decide is in the best interests of the students.”

The meeting was attended by all the provincial education ministers, concerned senior officials and Special Assistant to the Prime Minister for Health Dr Faisal Sultan.

Participants discussed the start of a new academic session, the reopening of schools in light of the current Cove 19 situation, and the vaccination of school teachers and other staff members.

Measures to strengthen performance for comprehensive and responsible education, funding, coordination and reporting were also discussed.

After the meeting, Education Minister Saeed Ghani said that all educational institutions in the province would remain closed till August 8 and the remaining intermediate examinations in Sindh would be held after the situation of corona virus improved.

The education minister said in a statement that educational institutions would remain closed as per the Corona virus ban in Sindh as part of the lockdown across the province.

The Education Minister said that the situation of Corona virus in Sindh and especially in Karachi was not satisfactory.

Ghani emphasized that the cases of corona virus in Karachi and Hyderabad were much higher than in other parts of the country. With that in mind, he said, it is not possible to reopen schools.

The provincial coronavirus task force will meet on August 8 and work out the way forward, the provincial education minister said.

Sindh had suspended all examinations after imposing a lockdown in the province on July 31, and had also suspended all activities related to personal education.