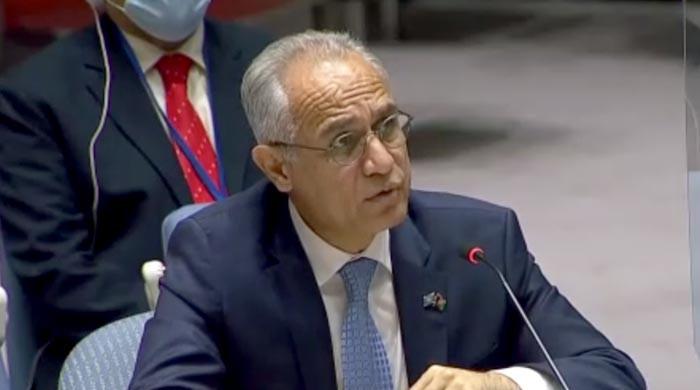 Ghulam M. Asikzai, Afghanistan’s ambassador to the United Nations and permanent representative, said Pakistan should help Afghanistan defeat the Taliban for peace in the war-torn country.

The Afghan ambassador’s remarks came during an open session of the UN Security Council on the deteriorating situation in Afghanistan.

The debate was requested by the Afghan government as well as Norway and Estonia. The last Security Council meeting was on Afghanistan in June, but the situation in the conflict-ridden country has deteriorated sharply since then.

No significant progress has been made in peace talks between the Taliban and the Afghan government in Doha, Qatar, which began last year, as the war continues.

Ishaqzai, who represented Foreign Minister Hanif Atmar at the meeting, said the Taliban had carried out barbaric attacks, which had further destabilized the country.

Their relationship with the Taliban and terrorists

In recent days, the Taliban and their affiliates have carried out more than 5,000 attacks in 31 of the 34 provinces, Ishaqzai said.

The ambassador said the group had cut ties with international terrorist organizations and violated the peace agreement.

“And their relationship can’t be broken,” he alleged.

“People who join and share with them also benefit,” he said. The Taliban are “linked to 20 foreign terrorist organizations,” he added.

The Afghan envoy told the Security Council that the Taliban were in contact with al-Qaeda, ISIS and militant groups in Turkmenistan and Uzbekistan.

“We urge Pakistan to dismantle the Taliban’s infrastructure and pipelines,” Ishaqzai said.

The UN envoy to Afghanistan called on the Taliban to immediately stop their attacks on major cities as he warned that the disputed country was heading for “disaster”.

Deborah Lyons, head of the UN relief operation in Afghanistan, painted a grim picture of the country’s deteriorating situation during a special session.

“The Security Council should issue a vague statement that attacks on cities must stop now,” Lyons told the 15-member council via video link from Kabul.

“We have a chance today,” Lyons pleaded with the council.

“An opportunity to demonstrate the commitment of the United Nations Security Council, and to the regional and international community that you represent to prevent Afghanistan from falling into a state of catastrophe, so serious that if there are any similarities in this century. If so, the number will be lower. ” Said.

Lyons added that countries meeting with Taliban representatives should “emphasize a general ceasefire” and “restart” the talks.

He said the travel ban would allow Taliban members to travel only for the purpose of peace talks, which would be extended next month to “predict real progress on peace”.

“The council should seriously consider providing a mandate to the United Nations that would allow it to play a greater role in facilitating negotiations at the request of both sides,” Lyons added.