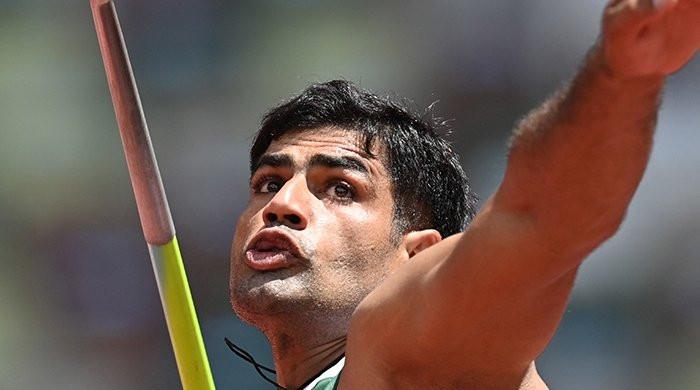 KARACHI: Pakistani athlete Arshad Nadeem will compete in the javelin throw final at the Olympic Stadium on Saturday evening.

Arshad is among the 12 contestants taking part in the final, which is scheduled to start at 4 pm Pakistan Standard Time.

In one round of the final, each thrower will be allowed three attempts to throw. Eight athletes will then advance to Round Two with three more attempts, while the rest will be eliminated.

Six of the best throws will be considered.

With high expectations from millions of Pakistanis, Arshad is looking forward to bringing home the medal.

Arshad qualified for the final round.

Arshad’s 85.16m throw was first in his group, while Julien’s throw was the best in the group stage. That effort led him to the final game on Wednesday, giving the nation hope to bring home a medal.

Later, he finished first and second in the group stage with India’s Neeraj Chopra and Germany’s Johannes Waiter, respectively.

The 24-year-old is one of the strongest contenders for the medal.

Despite a season of 86.38m and personal best, Arshad has made himself one of the top athletes in the competition, with only three players – Johannes Waiter (96.29m), Neeraj Chopra (88.07) and Andrew Mardare (86.66). Are ahead

Arshad is Pakistan’s national javelin throw champion, undefeated since 2015. However, it has broken its national record seven times in the last six years.

The eyes of Pakistanis are on Arshad because Pakistan has not won an Olympic medal since 1992. The last Olympic medal for the country was a bronze, claimed by the hockey team in Barcelona. Earlier, boxer Hussain Shah had brought home an individual medal in 1988.