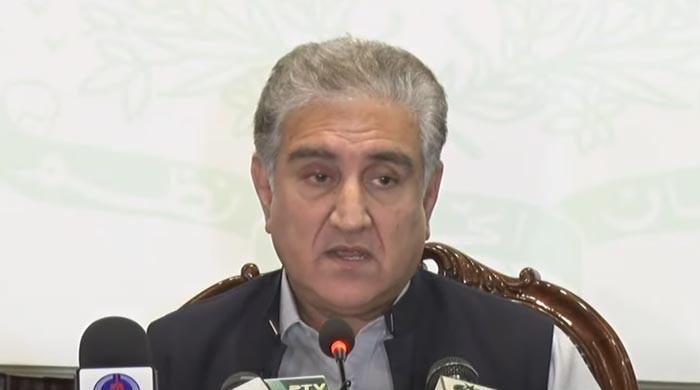 Foreign Minister Shah Mehmood Qureshi on Monday lamented the use of Pakistan as a scapegoat for Afghanistan’s problems, when he responded to allegations made by Afghanistan at the UN Security Council.

Addressing a press conference, Foreign Minister Shah Mehmood Qureshi said, “It is unfortunate to make Pakistan a scapegoat for the failures of others.

Foreign Minister Shah Mehmood Qureshi said that India was violating its responsibility as the President of the UN Security Council by requesting Pakistan to brief the forum on the situation in Afghanistan and its role. Rejected.

The Foreign Minister said that Pakistan should have been invited to the UN Security Council meeting as it was not only a neighbor but also the biggest loser after Afghanistan.

The Foreign Minister noted that Pakistan is the largest contributor to peace and stability in Afghanistan and has been facilitating the peace process in the war-torn country.

“We asked to be there, but unfortunately it was not accepted,” he said.

However, he did not behave in a manner that was in line with his responsibility. We believe that India has been violating its responsibility as President of the Security Council.

The Foreign Minister said that Pakistan has been facilitating the peace process and our role has been and will continue to be a facilitator.

“We cannot guarantee that we can only provide convenience,” he said.

Pakistan played a key role in bringing the Taliban to the negotiating table in 2019. In February 2020, the United States facilitated the conclusion of the Taliban peace agreement in Doha. He said that he helped hold the inter-Afghan talks in September last year and in December 2020 it played an important role in the rules of procedure between the parties.

The Foreign Minister said that Pakistan has joined Islamabad, Washington and Beijing to facilitate inter-Afghan dialogue and Doha peace process.

FM Qureshi said he was looking forward to the Troika meeting in Doha on August 11.

The foreign minister recalled that Pakistan had organized a conference for Afghan leaders last month – minus the Taliban – to discuss the way forward, which was later postponed at the request of Afghan President Ashraf Ghani.

“We reiterate the need for effective use of available peace mechanisms,” he said. He further said that Pakistan has always emphasized the need for dialogue instead of pointing fingers.

Foreign Minister Shah Mehmood Qureshi said he had invited his Afghan counterpart to visit Islamabad and discuss the issues facing the country so that they could be resolved.

“We also urge the Afghan government to refrain from blaming and engage in meaningful dialogue with Pakistan to address the challenges to peace, security and development in the region,” he said.

The Foreign Minister highlighted that the peace process in Afghanistan is at a critical juncture and that all energies must be focused on finding a comprehensive, broad-based and comprehensive political solution through a political process.

FM Qureshi reiterated that Pakistan has no favorites because it considers all parties to the war-torn country to be Afghans – we don’t care, they are all Afghans – and they have to decide their own future.

The Foreign Minister said that Pakistan was concerned over the escalating violence and lack of significant progress in the inter-Afghan talks as the withdrawal of foreign troops was nearing completion.

The Foreign Minister said that Pakistan was concerned over the escalating violence and lack of significant progress in the intra-Afghan talks as the withdrawal of foreign troops was nearing completion.

“Islamabad is also deeply concerned about human rights violations and urges all parties to respect human rights and international humanitarian law,” he said.

“Where did the money spent in Afghanistan go? The lack of will to fight, what we see in Afghanistan, can we be held responsible for that? No, we don’t,” he said in response to a question. Can do. “

“We will not apologize. […] Because we have been as sincere and honest as it was in line with Imran Khan’s intention.

FM Qureshi highlighted that the Pakistani people are suffering and the international community and Afghanistan must understand its value. “We lost 80,000 lives, we suffered huge economic losses – and the world should not ignore that.”