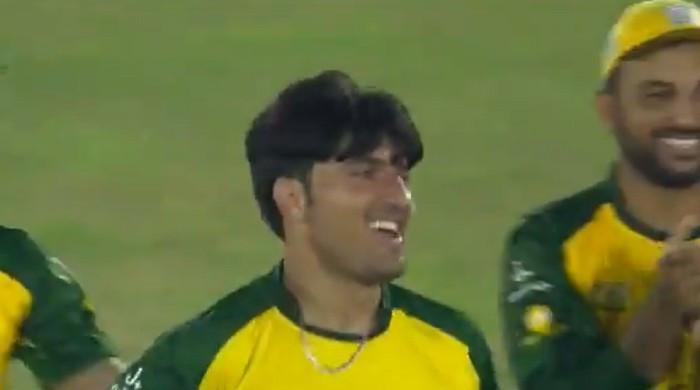 Wasim Jr. made history in the second over of the match against Rawalpindi Hawks.

The Muzaffarabad Tigers were placed in a commanding position early in the match when Wasim gave an accurate delivery to Bismillah Khan, who had scored just one run at the time.

Kashif Ali then came to bat and was not ready for at least another fast delivery which moved towards the stumps which hit his pad and gave another wicket to Wasim.

Wasim came steaming on the hat trick and made the experienced Umar Amin fast bowling. The left-handed batsman failed to bring the ball down to his leg, breaking his stumps.

“How often do you see it?” The commentator said the bowler celebrated with his teammates. “It’s a rare thing. It puts a smile on the franchise owner’s face,” he added.

Rawalpindi Hawks and Muzaffarabad Tigers clashed, the former won by one wicket in the end.

Hussain Talat scored an unbeaten 69 off 46 balls with six fours and three sixes with the help of his confident batting show.

The Hawks, led by Shahid Afridi, set a target of 175 which proved to be too cumbersome for the Tigers to score just 174 for eight in 20 overs.

All-rounder Mohammad Hafeez played the captain’s innings and scored 44 off 31 balls. But, he could not save his team from defeat at the hands of the Hawks. Zeeshan Ashraf batted brilliantly and scored 38 off 20 balls to lead his team to victory.