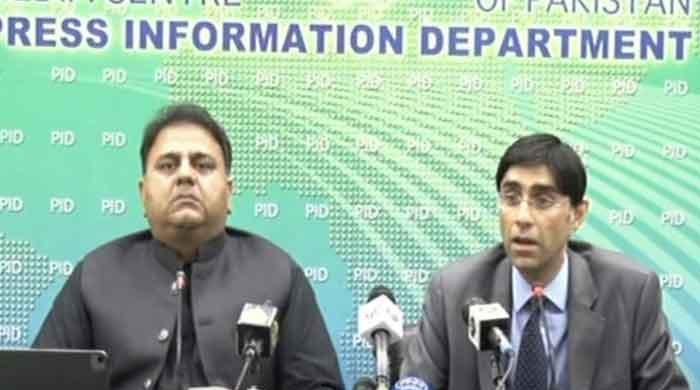 Yousuf shared data on anti-Pakistan social media trends launched between 2019 and 2021, most of which have been traced to India and Afghanistan, with the aim of “targeting, deliberately and consciously” against Pakistan. Is a misinformation campaign.

He said he wanted to talk specifically about Afghanistan, where the Taliban and the government are at war.

He said the government’s social media teams and think tanks have worked to gather evidence on a large scale, showing that “social media accounts from Afghanistan and India have been repeatedly used to discredit Pakistan.” Is”.

Yousuf said that a #SanctionPakistan trend has recently spread online and it is worth investigating whether it is organic.

In addition, the NSA added, efforts are being made to hold Pakistan responsible for all the failures accumulated in the 20-year-long war in Afghanistan.

He said that as US troops began withdrawing from Afghanistan and the Taliban took control of cities and provincial capitals, “there was a growing story against Pakistan aimed at avoiding blaming itself for its failures.” ۔

“And it is very unfortunate that some high-ranking officials in the Afghan government are part of it, some of whom have come forward,” he said.

He said that “many accounts have links with the state” and also through India “a very well coordinated campaign is being launched against Pakistan”.

“We will expose all these truths, not through fake news but through statistics and facts. We will create a story to tell the world what is being done to Pakistan.”

The NSA then showed some slides, one of which was the post-2019 timeline, and the other, showing how, as things got worse in Afghanistan, hashtags against Pakistan surfaced.

Yusuf said there are five broad themes that can be seen in the trends:

The NSA said one important thing to note is the use of “bots” that artificially advance trends.

“Unfortunately, inside Pakistan, people who are ignorant, who think it’s happening organically, retweet these hashtags. They think it’s a natural, organic thing.

“A lot of the videos, I tell you, are five years old, 10 years old, but because they are in line with the international media’s narrative, they are being spread as if they exist,” Yousef said.

He said that 30-40% of the activity is done through these boats.

Speaking in more depth about the #SanctionPakistan trend, he said that he had just come from the United States, and “there is no such thing, it is neither true nor has any merit”.

“So I urge my people to know this: there is no reason for that. We are having a positive dialogue with every major country.”

He said August 9 and 10 saw a sharp rise in the trend and people were surprised but “the fact is that the United States, which had invested a trillion dollars in the war, wanted it. That they should not fight it anymore. “

“So is this our problem, or theirs?”

Yousuf also dismissed the notion that Pakistan was supporting the Taliban, saying, “If one looks at the areas they have occupied, they are so far from here that there is little to reach.” It will take at least 10 days. “

“So please, there must be some sense before we talk about such things.”

Yousef then tried to address the media in English to an international audience.

“We have only summarized for the audience and the press, a targeted, deliberate and conscious misinformation campaign against Pakistan, which is directly linked to the accounts of Afghanistan and India, some unfortunately linked to state apparatus They are trying to defame Pakistan in the international arena. The NSA said that defaming the Pakistani government and army, talking about fictitious nationalism, targeting the China-Pakistan Economic Corridor and what is happening in Afghanistan Are trying to put all the blame on Pakistan.

Ladies and Gentlemen, I must remind you that Pakistan is a victim of the war in Afghanistan: more than 80,000 lives lost, 150 150 billion lost to the economy. Stop blaming the victim. Look inside It will not work.

“We will continue to do so because we know what kind of misinformation campaign is going on to rid the Afghan leadership of its own failures,” Yusuf stressed.

He said the information war was a “key pillar” of the hybrid war against Pakistan but the country now had the ability to “undoubtedly” demonstrate what was happening against Pakistan.

In all this, the ‘real tragedy’.

Yousuf said the “real tragedy” in all of this was that instead of focusing all its efforts on a political settlement in Afghanistan, which is Pakistan’s priority and endeavor – to move to “many responsible positions”. Trying Allegations “, trying to create such misinformation campaigns.

He urged his fellow Pakistanis not to believe everything on social media. “Please check and confirm before you see a trend in a particular direction.”

“Our security forces, security apparatus and the government are vigilant and inshallah we are safe, and will be safe. There is nothing to worry about but this fake news campaign is going on and we will not hesitate to say who it is. Is doing, “Joseph concluded.

India has the biggest hand behind anti-state social media trends

He said that India has the biggest hand in social media trends against Pakistan.

Citing the example of Usman Kakar, a senior leader of the Pakhtunkhwa Milli Awami Party, who said he died of a brain hemorrhage, the minister said India had also launched a fake social media campaign against his death.

Chaudhry said about 2,000 tweets were posted from Indian accounts on his death.

He also described how PTI member Zulfi Bukhari was accused of secretly visiting Israel. Israel launched a social media trend in this regard in which 10,000 tweets were posted.

The Information Minister said that the media team of PML-N and JUI-F also participated in this trend with full enthusiasm.

He said all differences between groups in Pakistan stem from “foreign intervention”.

“Social media accounts from abroad are involved in trying to spread sectarian hatred.”

He warned that a massive media war has been launched against Pakistan through fake news.