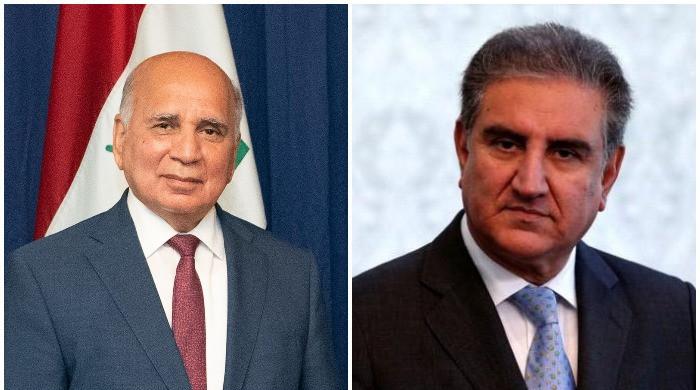 ISLAMABAD: Pakistan and Iraq on Wednesday reaffirmed the long-standing and friendly relations between the two countries and pledged to further strengthen cooperation on all fronts.

A statement issued by the Foreign Ministry said that the two ministers had in-depth discussions at the level of delegations, during which they discussed bilateral relations as well as regional and global issues of common interest.

After talks at the delegation level, an MoU on ‘Bilateral Political Consultations’ was signed. The MoU is about establishing a mechanism for regular consultations on bilateral issues as well as regional and international issues of mutual interest.

The two sides reaffirmed the long-standing and friendly relationship between the two countries, which is rooted in common beliefs, shared values ​​and cultural affiliations. He also reiterated his desire to further strengthen bilateral relations in all fields.

Foreign Minister Qureshi reiterated Pakistan’s support for Iraq’s territorial integrity and sovereignty and acknowledged the achievements of Iraq and its people in the fight against terrorism. He particularly appreciated the flexibility of the Iraqi people in overcoming their challenges and rebuilding the country.

Issues related to visitors’ visits to Iraq and people-to-people contacts were also discussed. Appreciating the Iraqi government’s efforts to improve the well-being of pilgrims during Kuwaid 19, Qureshi called for more visa and travel facilitation, especially during Muharram and Arbaeen.

Focusing on geo-economics from Pakistan’s geopolitics, Shah Mehmood Qureshi emphasized the importance of enhancing bilateral trade and economic co-operation. He highlighted cooperation in the fields of tourism promotion, scientific and educational cooperation, as well as food security and oil.

FM Qureshi briefed the Iraqi Foreign Minister on the deteriorating human rights situation in the IIOJK and highlighted Pakistan’s principled position on a peaceful solution to Jammu and Kashmir in accordance with UN Security Council resolutions and the aspirations of the Kashmiri people. ڈالی۔

Stressing that there is no military solution to the Afghan conflict, the Foreign Minister emphasized Pakistan’s continued efforts to promote a comprehensive, broad-based and comprehensive political settlement in Afghanistan. He expressed grave concern over the escalation of violence, called for constructive consultation with the Afghan parties for a negotiated political solution and reiterated Pakistan’s commitment to continue to fully support all efforts for a political solution.

The Foreign Minister also discussed the latest developments in the Palestinian issue and reaffirmed Pakistan’s continued and unwavering support for the Palestinian cause.

In addition to meeting with the Pakistani leadership, the Iraqi Foreign Minister will also meet with key federal ministers to discuss issues related to their respective fields.