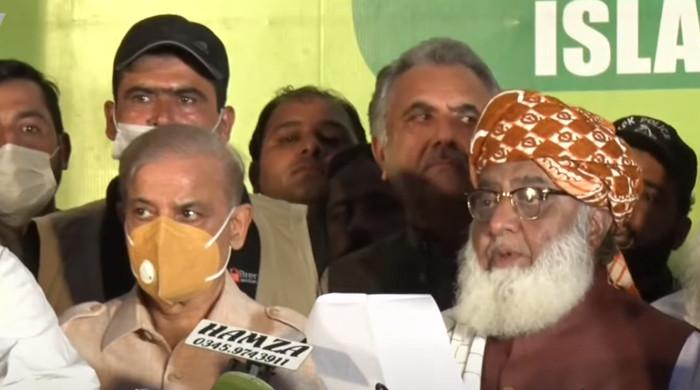 Fazlur Rehman, head of the Pakistan Democratic Movement (PDM), said on Wednesday that all state institutions should work within the constitutional framework so that the country could abide by the constitution wholeheartedly.

There is currently no constitutional rule in the country. […] Freedom of expression is being attacked on a large scale, journalists are being ambushed.

“We reject every electoral reform proposed by this elected government, and we believe that the NAB and the FIA ​​have become political institutions, which have lost their position, because they are in opposition,” he said. Is being used against. “

The PDM demanded that the cases registered against journalists by the FIA ​​be withdrawn, adding that the government should end its tactics to stop the press.

During the meeting, it was decided that the PDM would direct all its efforts to ensure free and fair elections. [take place] In the country, “said Fazal.

Rejecting the government’s “unilateral” electoral reforms and the Azad Jammu and Kashmir election results, he called the electronic voting machine “the easiest way to rig”.

The PDM chief said the participants in the meeting unanimously agreed that “the country is facing internal and external threats”, and that the current government has “completely failed” to address the current threats.

The PDM chief said that Pakistan was facing isolation due to the policies of the present government.

He reminded that Pakistan was not allowed to present its case on Afghanistan during the recent UN Security Council meeting.

“The PDM believes that the only way forward in Afghanistan is a comprehensive political solution. Pakistan wants a political and stable Afghanistan,” Fazal said.

Fazal said the PDM leaders took an in-depth look at the internal and external challenges facing Pakistan, after which the participants demanded that opposition lawmakers be taken into confidence over the situation in the neighboring war-torn country.

The JUI chief said that an important section of the country was unaware of the situation as the facts were being hidden from them.

Talking about the next course of action of the PDM, he said that the steering committee of the alliance would hold a meeting in Islamabad on August 21 during which the parties would consider the recommendations made today after internal deliberations. Will

The PDM chief said that final decisions would be taken at the committee meeting to be held in Karachi on August 28, after which a big rally would be held in the port city on August 29.

The meeting also decided that Qaumi Watan Party chief Aftab Sherpao would be made the senior vice president of the alliance.

Fazal said the government has dried up the population with historic inflation and unemployment to meet the conditions of the International Monetary Fund.