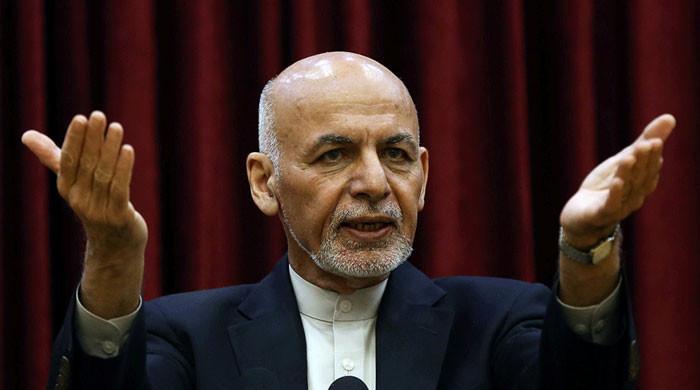 MAZAR-I-SHARIF: Afghan President Ashraf Ghani returned to the capital on Wednesday after a visit to the northern city of Mazar-e-Sharif to rally his troubled forces, with Taliban fighters now occupying more than a quarter of the country’s provincial capitals. In less than a week

His visit was overshadowed by the massive surrender of hundreds of Afghan soldiers in nearby Kunduz, as well as the overnight capture of another provincial capital – the ninth city, which will be under siege from Friday.

An army officer in Kunduz, who asked not to be identified, said he had endured mortar shelling at the airport and had no choice but to surrender.

“There was no way to fight back,” he told AFP.

The loss of Mazar-e-Sharif would be a catastrophic blow to the Kabul government and would represent a complete end to its control of the north – a longtime stronghold of anti-Taliban militias.

Hours before Ghani’s arrival, photos posted on state-run social media accounts showed Dostum boarding a plane to the shrine in Kabul, accompanied by a group of commandos.

After arriving in the city, Dostum issued a warning to incoming insurgents.

“The Taliban never learn from the past,” he said.

“The Taliban have come to the north many times but they were always trapped. It is not easy for them to get out.”

Dostum is accused of massacring hundreds, if not thousands, of Taliban prisoners of war during US-backed operations in 2001 that overthrew the Taliban government.

The fighting in Afghanistan has escalated dramatically since May, when the US-led military coalition began the final phase of the withdrawal, which was to be completed before the end of the month.

The United Nations said on Wednesday that there had been a “significant increase” in internal migration and that 390,000 Afghans had been displaced by the conflict since the beginning of the year.

A local lawmaker east of the shrine in Faizabad, the capital of Badakhshan Province, told AFP that security forces had retreated after days of fierce fighting.

Zabihullah Atiq said the Taliban had taken control of the city.

Kunduz is the Taliban’s biggest reward to date, with no large-scale surrender at the airport making retaliation possible at the moment.

Some government forces were still trapped in army barracks outside the city.

Insurgents are seen tightening their grip on occupied cities in the north, rifle fighters patrolling the streets of Kunduz on foot, and smoke billowing from shops destroyed during the fighting.

Government forces were fighting the Taliban in Kandahar and Helmand, the southern Pashto-speaking provinces from which the Taliban draw their strength.

In Kandahar, heavy fighting was reported near the city jail, which militants have been trying to reach for weeks.

The Taliban claimed on Twitter on Wednesday night that the facility had been “completely conquered after a long siege” and that “hundreds of prisoners had been released and taken to safety.”

The Taliban often target prisons to free captured fighters and fill their ranks.

Meanwhile, US diplomats were desperately trying to breathe life into the talks between the Afghan government and the Taliban in Doha, where Washington’s special envoy Zalmai Khalilzad was forcing the rebels to accept a ceasefire. ۔

The State Department said Wednesday that Khalilzad would meet separately with Afghan government and Taliban negotiators to work out a political solution “to form a comprehensive Afghan government.”

“Only through diplomacy can we achieve the fair and lasting results we want,” state spokesman Ned Price told reporters.

Turkey has troops in Afghanistan as part of a NATO force and has offered to secure Kabul airport following the withdrawal of US troops.

But the Taliban appear largely indifferent to the peace talks, and intend to achieve a military victory after their ouster 20 years ago in the wake of the September 11 attacks.