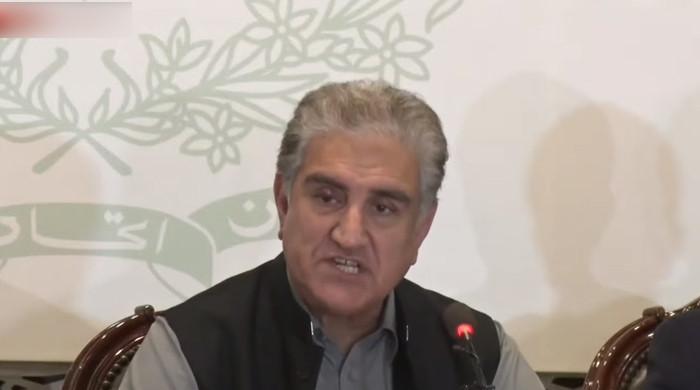 At least 12 people, including nine Chinese working on the Dasu Hydel Project, were killed when a bus carrying them fell into a ditch after an explosion.

The tragic incident was investigated with the help of a 15-member Chinese security team.

Addressing a press conference, FM Qureshi said: “Afghanistan’s land was used for planning; planning and implementation are clearly linked to the RAW and NDS nexus.”

“The alliance cannot tolerate the growing cooperation between China and Pakistan and the increase in Chinese investment in the country,” the foreign minister said, adding that he had failed in his efforts.

The Foreign Minister said that the Pakistani authorities have traced the handlers of the incident and the investigation has revealed that the car used in the incident was smuggled into Pakistan.

The investigation also revealed that the main target of the terrorists was Diamer Bhasha Dam, but when they failed there, they chose the next Dasu.

Qureshi said the government came to a conclusion considering several aspects of the investigation.

Authorities inspected 36 CCTV cameras on the 1,400km route that the bus passed, he said.

“We got a thumb, finger and body parts. […] Which was later analyzed, “the foreign minister added, adding that the authorities at the moment are quite convinced that he should be linked to the suicide bomber.

Qureshi said authorities also recovered mobile phones from the bus – carrying security personnel and Chinese nationals – and examined the data on them.

“We came to the initial conclusion that this was a blind matter and could not be solved easily, but our institutions have solved it successfully,” he said.

He said that more than one thousand workers of Dasu Hydel Project were examined and interviewed.

In addition, the car used in the incident has been identified as to where it came from and how it was smuggled into Pakistan.

While handling the media briefing, Deputy Inspector General Counter Terrorism Department Khyber Pakhtunkhwa Javed Iqbal said that the convoy of vehicles left its base camp for Dasu at 7 am. The incident took place on the Central Karakoram Highway (KKH) Road, after which the CTD, along with other intelligence agencies, led the investigation.

“We have found the car parts used in the incident. The finger and thumb of the alleged suicide bomber. [Khalid aka Sheikh] Also recovered from the site and we did their forensic and chemical analysis.

“The man’s DNA and other samples were cross-checked from the National Database and Registration Authority’s (NDARA) database, but we did not find any trace there,” Iqbal said.

Authorities then analyzed more than 500 GB of CCTV camera data, which helped us identify a vehicle, the Honda Accord.

“The mobile phones we found belonged to people who were on the bus and we could not find any trace there,” he said.

“We’ve eliminated all the angles that are used to solve a case,” he said.

“Authorities gathered information from across the country in search of the vehicle, a Honda Accord, and finally we found a” Chaman 2 Motors “sticker on the vehicle’s number plate,” he said.

Iqbal said the showroom owner informed authorities that he had bought the car seven or six months ago in November 2020. “When we pulled the car back, it turned out that it had been taken from Afghanistan.”

Authorities later found a mobile phone through which they searched for the first suspect, Hussein. We later tracked him down and through Hussain we reached another accused Ayaz and arrested him from Karachi.

He said Hussein’s two sons, who were included in the investigation, confirmed that their father had bought the car back in November.

When Hussain and Ayaz were questioned, it was revealed that another suspect, Tariq, who belongs to the banned Tehreek-e-Taliban Pakistan and lives in Afghanistan, was also involved. Iqbal said he had returned to the country after the incident.

“RAW and NDS supported the people involved in the incident. Everyone in Pakistan who planned the attack has been arrested,” the DIG said.

Fourteen people are involved in the incident and Tariq is running the group from Afghanistan with the help of NDS and RAW.