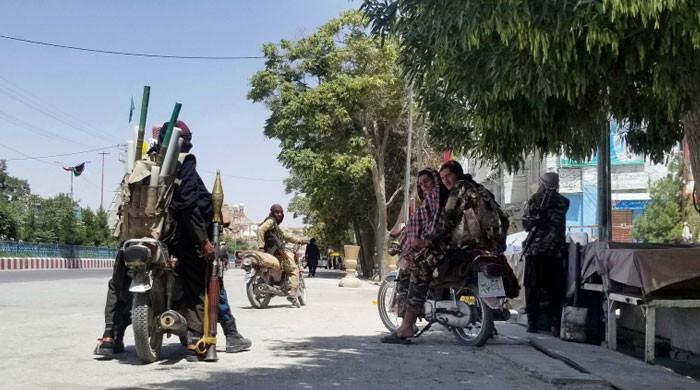 KABUL: The United States will send troops to evacuate troops from Afghanistan, as the Taliban claimed control of another city, Kandahar, on Friday, limiting the eight-day blitz that only pocketed the capital and other areas into government hands. Have left

Hours before the US announcement, a Taliban spokesman tweeted that the fall of Kandahar was the spiritual birthplace of the movement and a scene of intense fighting.

“Kandahar has been completely conquered. Mujahideen have reached Shuhada Chowk,” a Taliban spokesman tweeted on an officially recognized account, citing a key location in the city.

The claim was supported by a resident who told AFP that government forces appeared to have retreated to a large military installation outside the southern city.

The government has effectively lost control of much of the country since the Taliban’s eight-day offensive, which has taken the United States by surprise, even as it moves forward with the withdrawal of troops by the end of the month. .

As the rebels seized more territory, Washington and London moved quickly to evacuate their embassy staff and other citizens from the capital.

“We are further reducing the footprints of our citizens in Kabul,” State Department spokesman Ned Price told reporters.

“It’s not Turkish. It’s not evacuation. It’s not a return of saliva,” he said.

The Pentagon said 3,000 US troops would be stationed in Kabul in the next 24 to 48 hours, stressing that they would not be used to launch attacks against the Taliban.

London will send 600 troops to evacuate its citizens and “support the relocation of former Afghan personnel who risked their lives to serve us,” said Ben Wallace, Britain’s defense secretary.

Price said the United States would also begin sending daily flights to evacuate Afghan interpreters and others who helped the Americans and feared for their lives because of the Taliban’s offensive.

After weeks of siege, government forces evacuated Herat on Thursday – an ancient Silk Road near the Iranian border – and retreated to the district army barracks.

“We had to leave the city to prevent further destruction,” a senior city security source told AFP.

However, a Taliban spokesman tweeted that “the soldiers surrendered and joined the Mujahideen”.

Masoom Jan, a resident of Herat, told AFP that the city had fallen suddenly, adding that the Taliban “entered the city in a rush. They raised their flags in every corner.”

On Thursday, the Interior Ministry confirmed the fall of Ghazni, 150km (95 miles) from Kabul, and along the main highway to Kandahar and the Taliban’s strongholds in the south.

Enemy spokesman Mirwais Stanekzai said in a message to the media, “The enemy took control, later the governor of the city was arrested by Afghan security forces.

A video was shown on pro-Taliban Twitter feeds in which he was taken out of Ghazni by Taliban fighters and sent with a convoy, sparking speculation in the capital that the government was angry that the provincial administration How easily he was arrested.

A security source told AFP that Qala-e-Naw, the capital of northwestern Badghis province, was also closed on Thursday.

As a solution to the route, three-day meetings between key international players on Afghanistan ended without progress in Qatar on Thursday.

In a joint statement, the international community, including the United States, Pakistan, the European Union and China, said they would not recognize any government in Afghanistan “imposed by the use of military force.”

Price called for a negotiated solution and reiterated US President Joe Biden’s frustration with the deteriorating situation, saying that after billions of dollars in US government aid over two decades, Afghan government forces had given the Taliban more than three to one. done.

Faced with pressure at home, Biden was criticized by top Republicans in Congress on Thursday for his “reckless policy.”

“Afghanistan is looking at a large-scale, predictable and preventable catastrophe,” Senator Mitch McConnell said in a statement.

The conflict has escalated dramatically since May, when US-led forces began the final phase of a military withdrawal later this month after a 20-year occupation.

Pro-Taliban social media accounts also boast of the vast spoils of war that their fighters have seized in recent days, including armored vehicles, heavy weapons and even drones seized from rebel-held military bases. Photos were published.

In the past week, insurgents have seized a dozen provincial capitals and laid siege to the largest city in the north, Mazar-e-Sharif’s traditional anti-Taliban stronghold, now one of the few remaining strongholds.

Fighting also broke out in Lashkar Gah, another pro-Taliban stronghold in the south.

Late Thursday, a security source told AFP that government forces there were also considering evacuating the nearby Camp Bastion, one of the country’s largest U.S. bases.

Millions of people have been displaced by the fighting that has engulfed the country.

In recent days, Kabul has been overrun by homeless people, who have begun camping in parks and other public places, leading to a fresh humanitarian crisis in the already pending capital.