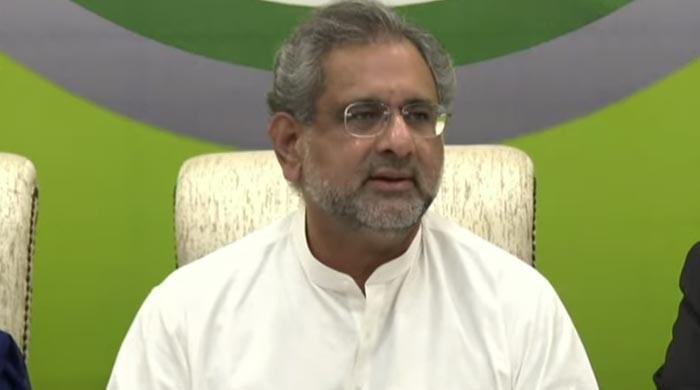 ISLAMABAD: The Pakistan Muslim League-Nawaz (PML-N) has criticized the government for including journalists and political opponents in the “Anti-State Trends Deep Analytics Report”, saying it was based on “assumptions”.

Addressing a press conference, former Prime Minister Shahid Khaqan Abbasi likened the policies of the current government to those seen during the martial law era.

Under martial law, political leaders and journalists are called traitors. […] What is the difference between them? [those allegations] And a political government that declares political parties and patriots anti-state? Abbasi asked.

The former prime minister pointed out that the government had shown Kashmir as part of India on six or five different occasions in the report and said that “if the Center had read the report, they would have been more responsible”.

Abbasi said the document claimed that 3 million tweets were made, but failed to say what he was talking about – nor did he say whether the tweets were anti-Pakistan or pro-Pakistan.

“If this government is good at anything, it is lying,” he said.

He said that a large part of the report was against Pakistan’s political parties.

“Several journalists have been named in the report and when asked for evidence, they said it was based on assumptions,” Abbasi added.

He said that former senator Afriab Khattak, PPP leader Farhatullah Babar, former MNA Bushra Gohar and other important personalities have been included in the list of those who uploaded anti-state tweets.

In addition, the name of Reham Khan, the ex-wife of Prime Minister Imran Khan, is also on the anti-state tweet list, Abbasi said, mocking the government.

The policies of this government have isolated us from the world. […] We were so helpless that we had to get data from a Canadian company, “the former prime minister added, adding that he had ridiculed the government.

Calling attention to the recent 8-hour meeting where Director General of Inter-Services Intelligence (ISI) Lt. Gen. Faiz Hameed briefed the parliamentarians on the situation in Afghanistan, he said that the PTM and the PML-N ) Were present during the session.

He said such steps (releasing the report) were being taken to divert attention from the developing situation in Afghanistan.

Responding to the PML-N’s press conference, Fawad Chaudhry said that he was not surprised, as unfortunately no political party has separate wings to keep its leadership informed about the changing situation in the country.

“When ‘computer illiterate’ leaders like Khurram Dastgir, Shahid Khaqan Abbasi, and Rana Sanaullah start commenting on the issue, you are expected to hold a laughing press conference,” the minister said in a video statement. “

“The report does not name anyone as anti-state as the government only provides statistics on how 150 anti-Pakistan trends run on social media, which has the support of 3.7 million tweets,” Fawad said.

“Afghanistan and India supported the construction of a statement on social media through these trends. Boot technology was also used from India,” the Information Minister said.

The report did not comment on people living in the country, the information minister said, rejecting the PML-N’s position.

“If a trend starts, for example, the #SanctionPakistan trend has been going on on social media for the last two days, and if I say, ‘What a stupid trend’, even though I’m participating in it, I I am not involved in any opposition. State activity, “he said.

“Therefore, if you do not have a basic understanding of this issue, it is better to surround yourself with people who understand technology,” the information minister added.