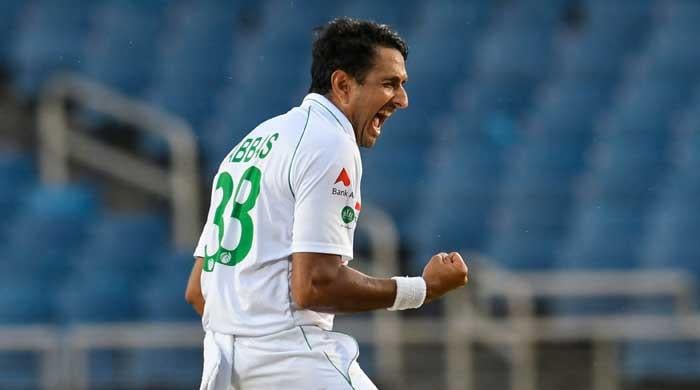 KINGSTON, Jamaica: Muhammad Abbas’s two wickets off two balls before the end of the game immediately put the West Indies on the back foot in response to Pakistan’s first innings 217 in the rain-affected first Test at Sabina Park. on Thursday.

At 2-2 on the second day, with captains Craig Braithwaite and Ruston Chase preparing to restart the innings, the home side will keep in mind the batting prowess that they lost in two similar Test doubles with South Africa. They ate and endured. Months ago in St. Lucia.

Abbas sealed the day of the bowlers and took Karen Powell down well on the second slip and then in the last 20 minutes of the game, before the next ball, Nakrama Bonar’s leg was caught.

It was the first Test innings after Bonner’s brief appearance on the opening day of the South Africa series when he was forced to retire from injury after being flushed on the first ball of fast bowler Enrich Nortje’s helmet.

Kemar Roach took his Test wickets to 225 in his 66th match and after half an hour of play, he removed Imran Butt and added a crucial wicket to Pakistan captain Babar Azam.

Babar and former captain Azhar Ali shared a 47-run stand for the third wicket, with Azhar drawing constant attention to the bizarre continuity of television technology in the afternoon session, leading to four consecutive decisions by the batsman. Were running on

However, it was the combined effort of left-handers Fawad Alam (56) and Faheem Ashraf (44) that gave the innings some weight.

The pair put on 85 for the sixth wicket when they were bowled out for just one run-out when Ashraf was found off the ground by a square-footed fielder Chase trying to complete a quick single.

Bowling on the pitch on the first day along with the West Indies, the conditions were a bit surprising for him.

“It was a little slower than I expected so I had to bowl a lot and the batsmen had to play a lot,” Holder said.

“I think it will be difficult with the bowlers available to them. We can look at the request made by Faheem and Fawad and take a sample from it.”

One day when 12 wickets fell, it was immediately four occasions when Azhar survived to fight early after lunch which proved to be the most memorable.

Twice the on-field umpire’s decision against him was reconsidered and he was rescued, and twice more Brathwaite failed to overturn the not-out decision through available television technology.

Holder was the unfortunate bowler on the first three occasions, while Kyle Myers was the second man to be particularly upset.

Ironically, it was the holder who caught a good low catch on the second slip and dismissed Azhar for 17 runs.