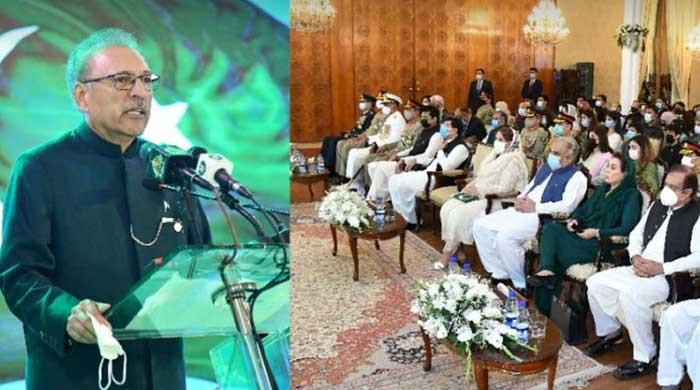 ISLAMABAD: President Dr Arif Alvi on Saturday said that Pakistan had sacrificed more than one lakh lives in the war against terrorism and emerged victorious.

Addressing the Independence Day celebrations at the Presidency in Islamabad today, President Alvi lauded the Armed Forces and the people of Pakistan for their bravery in fighting terrorism.

He said that Pakistan is the only country in the world which has defeated terrorism. On the occasion, the President paid rich tributes to Quaid-e-Azam Muhammad Ali Jinnah, Allama Iqbal, Syed Ahmad Khan and other founding leaders of Pakistan.

“Pakistan came into being after the immense sacrifices of the Muslims of the subcontinent,” he said, adding that it was because of their sacrifices that we are here today.

The President said that three wars were imposed on Pakistan under various pretexts.

Talking about India’s nuclear test, President Alvi said that Pakistan had given a proper response to New Delhi within seven years of its hard work. He said that arms race has also been imposed on Pakistan.

Today, the Pakistani nation is celebrating the 75th Independence Day with traditional fervor to highlight the struggle of our forefathers and national heroes for a separate homeland.

The day began with special prayers and a salute of 31 cannons in the federal capital and 21 cannons in all the provincial capitals. Special prayers were offered in the mosques at dawn for peace, unity and prosperity in the country.