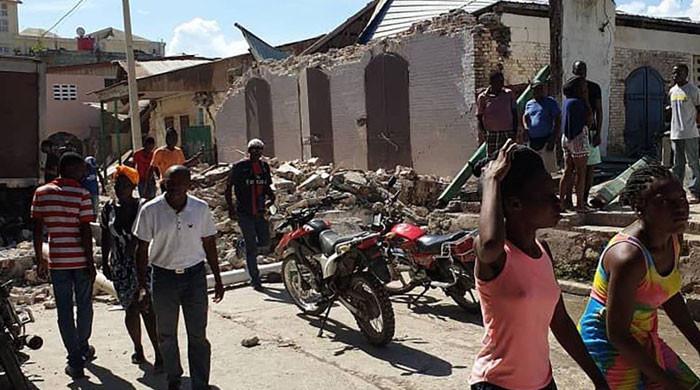 PORT AU PRINCE: Rescue workers have found survivors of a 7.2-magnitude earthquake in Haiti, killing at least 304 people and leaving the devastated Caribbean nation recovering from a devastating 2010 earthquake.

“Many homes were destroyed, people died and some were in hospital,” Cristella St. Hillary, 21, who lives near the quake’s epicenter, told AFP.

“I was in my house when it started moving, I was near a window and I saw everything fall,” he said. “A piece of the wall hit my back, but I didn’t feel much pain.”

The long, early quake was felt in most parts of the Caribbean. According to eyewitness accounts, it damaged schools as well as homes on Haiti’s southwestern peninsula.

The country’s civil protection agency said hours after the quake, the death toll had risen to 304, with the initial report of 29 deaths rising higher throughout the day.

The agency said hundreds of people were “injured and missing” and explained that 160 people had been killed in the epicenter in the southern part of the country alone.

“Early responses from both professional rescuers and members of the public have resulted in many people being evacuated from the wreckage. Injuries continue to be found in hospitals,” he added.

According to Jerry Chandler, head of the Civil Protection Agency, with thousands of injured, hospitals in the worst-affected areas were already struggling to provide emergency care, and at least three local government agencies, Pistol, Corals and Rosau, were completed. Were filled as

Haiti has declared a state of emergency in response to the disaster, and a White House official said US President Joe Biden had approved the launch of “immediate” relief efforts.

“I am saddened by the devastating earthquake, which is already a difficult time for the people of Haiti,” Biden said. He added that his country was “ready to assess the damage and assist in efforts to rehabilitate the injured and those affected”. “

Residents shared photos on social media of people trying to get out of the rubble of empty buildings, while screaming onlookers sought protection in the streets outside their homes.

“The houses and the walls around them have collapsed. The roof of the church has collapsed,” Ayub Joseph, a resident of Jeremy, on the far west coast of Haiti, told AFP.

Heavy damage has been reported in the city center, which consists mainly of one-story homes and buildings.

Damage to the city of Les Keys is noticeable, including the collapse of a high-rise hotel.

Haitian Prime Minister Ariel Henry, who surveyed the damage caused by the helicopter, declared a month-long state of emergency and called on the nation to “show solidarity” and not panic.

Shortly after the quake, the US Geological Survey (USGS) issued a tsunami alert, saying waves of up to three meters (about 10 feet) were possible off Haiti’s coastline but raised the warning shortly thereafter. Gone

However, the possibility of a tsunami sent parents “fleeing the city with their children at gunpoint,” said Jane Pierre, a Jeremy resident contact.

“People are scared,” he said.

A magnitude 7.0 earthquake in January 2010 turned most parts of Port-au-Prince and nearby cities into dusty ruins, killing more than 200,000 people and injuring 300,000.

More than 1.5 million Haitians have been displaced, and the island’s authorities and the international humanitarian community face a major challenge in a country that lacks either a land registry or building codes.

The quake destroyed hundreds of thousands of homes as well as administrative buildings and schools, not to mention 60% of Haiti’s healthcare system.

Reconstruction of the country’s main hospital is incomplete, and NGOs have struggled to address many of the state’s shortcomings.

The latest quake comes a month after President Juan Moyes was assassinated in his home by a team of gunmen who had already shaken the country’s poverty-stricken country. 19 was surrounded.