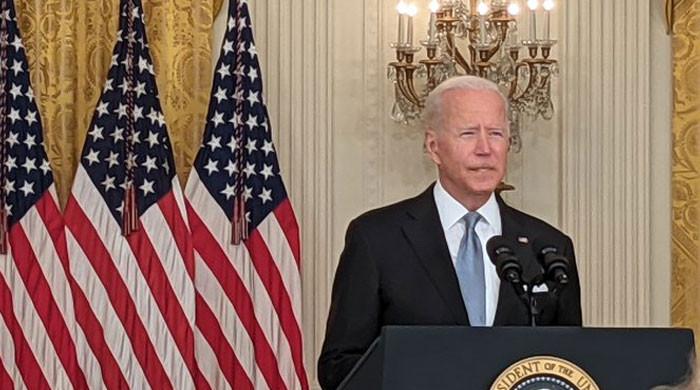 Washington – President Joe Biden acknowledged that the Afghan government fell faster than expected – and suggested he lacked the will to stand with the Taliban.

“The reality is that it came out much faster than we expected,” Biden said in a televised address to the White House.

Biden blamed the Afghan military and civilian leadership, saying “we gave them everything they needed. We provided close air support.”

He continued, “So what happened? Afghanistan’s political leaders gave up and fled the country. The Afghan army fell, sometimes without even trying to fight.”

The US leader said US troops could not fight or be killed in a war in which Afghan forces were unprepared to fight for themselves.

“We have spent a trillion dollars. We have trained and equipped an Afghan military force of 300 million. It is incredibly well-equipped. Compared to many of our NATO allies,” he said. I have great power. ”

“We gave them every tool they could need. We paid their salaries, we took care of their air force, something that the Taliban don’t have. The Taliban don’t have an air force. “We provided close air support. An opportunity to determine our own future. What we couldn’t provide them was a desire to fight for the future.”

“If Afghanistan is now unable to put up any real resistance against the Taliban, there is no possibility that one year – one more year, five more years or 20 more years – will be spent on American military bases on the ground,” Biden said. It doesn’t matter. ” Said.

The US president lamented the attitude of Afghanistan’s political leadership and reiterated his decision to withdraw US troops, saying, “It is wrong to order US troops to increase when Afghanistan does not have its own armed forces. Unable to come together for the good of the country, to negotiate for the future of our country when the chips were down. “

“They have never done that while American troops are in Afghanistan, fighting for them,” he added.

Biden also slammed President Ashraf Ghani, who said the flatout ignored his advice on achieving greater unity among leaders and a diplomatic solution.

“When I hosted President Ghani and Chairman Abdullah at the White House in June, and then when I spoke to Ghani on the phone in July, we talked very clearly. How to prepare for your civil war after the army. Gone, “he said.

“We talked extensively about the need for Afghan leaders to unite politically. They failed to do any of that. I urged them to get involved in diplomacy, politically with the Taliban.” Find a solution. This advice was flatly rejected. Mr. Ghani insisted that Afghan forces would fight, but obviously he was wrong.

The president also claimed that the Afghan government had allowed the departure of Afghans who had worked for the United States to create a crisis. “We will redouble our efforts to get them out,” he insisted.

The US leader once again defended the US withdrawal from Afghanistan, saying that he stood by the policy and that it was time to leave after 20 years of conflict.

“I am the president of the United States and the deer stays with me,” Biden said.

As the devastation in the Afghan capital unfolded, Biden said he was “deeply saddened” by the turn of events and promised to talk about the rights of women who are now returning to the Taliban regime. Are

But he insisted he did not regret the withdrawal of US troops – despite two decades of strong criticism of ending the chaos of US-led military intervention.

“I stand by my decision,” Biden said. “Twenty years later, I have learned with difficulty that there has never been a better time for the withdrawal of US troops.”

Biden, however, reiterated that the US national interest in Afghanistan has always been primarily about preventing terrorist attacks on the American homeland – and that the United States is “urgent” against any terrorist threat from the country. And decisive action will continue.

“The mission in Afghanistan was never considered nation building,” he said. “Our only major national interest in Afghanistan today is what it has always been: preventing a terrorist attack on the American homeland.

And the US president issued a stern warning to the Taliban not to disrupt or threaten the evacuation of thousands of US diplomats and Afghan translators at Kabul airport.

“If need be, we will defend our people with destructive force,” he said.

Biden warned the Taliban not to disrupt or threaten the evacuation of thousands of US diplomats and Afghan translators at Kabul airport.

Biden said the response to any attack would be “fast and powerful.”

“If need be, we will defend our people with destructive force,” he said.

President Biden once again defended the US withdrawal from Afghanistan, saying he stood by the policy and it was time to leave after 20 years of conflict.

“I stand by my decision. Twenty years later, I have learned with difficulty that there has never been a better time for the withdrawal of US forces,” he said.

He added that the US national interest in Afghanistan has always been primarily about preventing terrorist attacks on the American homeland from a war-torn country.

“The mission in Afghanistan was never considered nation building,” he said.

Earlier, Secretary of State Anthony Blanken, however, discussed Afghanistan with the foreign ministers of Russia and China, both of whom have made rapid progress in working with the Taliban.

The Russian Foreign Ministry said in a statement that the two sides “agreed to continue consultations with China, Pakistan and other interested nations in order to establish the right conditions for the start of comprehensive Afghan talks under the new conditions.” “

After the US decision to withdraw from Afghanistan, both Russia and China stepped up contacts with the Taliban, ended 20 years of military intervention and quickly overthrew the government in Kabul.

Moscow, which spent a decade in the costly Soviet occupation of Afghanistan during which it fought Washington-backed Islamic guerrillas, kept its embassy open in Kabul and planned talks with the Taliban.

Russia has said it sees the Taliban as “disciplined”, while China said Monday it wants “friendly and cooperative” relations with Afghanistan under the Taliban.

“China is ready for dialogue with the United States to push for a soft landing on the Afghan issue, to prevent a new civil war or humanitarian catastrophe in Afghanistan and not to turn the country into a terrorist haven again. Be done According to the state-run Xinhua news agency, Wang said.

US negotiator Zalmai Khalilzad, during his failed diplomacy, held regular consultations with Russia and China to encourage a peaceful power-sharing deal as the United States withdrew.