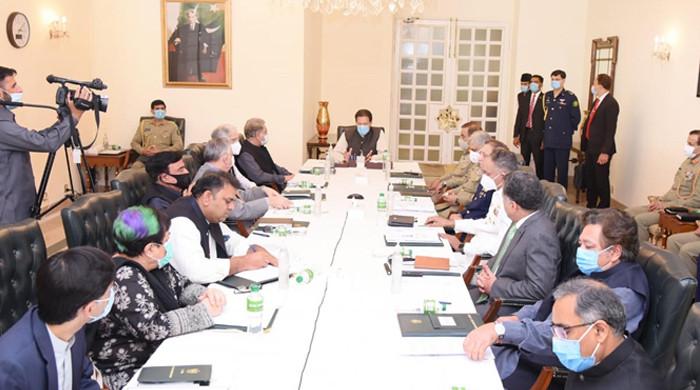 The National Security Committee (NSC) reiterated Monday that Pakistan is committed to a comprehensive political settlement that represents all Afghan ethnic groups.

The development came during an NSC meeting convened to consider the evolving situation in Afghanistan – chaired by Prime Minister Imran Khan.

The NSC meeting was attended by senior cabinet members and heads of services. Participants were briefed on the latest developments in Afghanistan and their potential impact on Pakistan and the region. The overall security situation in the region was also discussed.

The NSC noted that Pakistan has been a victim of decades of conflict in Afghanistan and therefore seeks peace and stability in the neighborhood. It was emphasized that the world should recognize the sacrifices made by Pakistan over the past four decades.

It was reaffirmed that Pakistan would continue to work with the international community and all Afghan stakeholders for a comprehensive political settlement in the country. Furthermore, the meeting stressed the need to adhere to the principle of non-interference in Afghanistan.

The NSC positively noted that major violence has been averted so far and called on all parties in Afghanistan to respect the rule of law, protect and ensure the basic human rights of all Afghans. That Afghan soil should not be used against any terrorist organization or group. Any country.

Prime Minister Imran Khan directed that all possible facilities should be provided to Pakistanis, diplomats, journalists and staff of international organizations wishing to leave Afghanistan. The Prime Minister appreciated the ongoing efforts of the Pakistani Embassy in Kabul and the state machinery in this regard.

The NSC reiterated Pakistan’s position that there is never a military solution to the Afghan conflict. The ideal time to end the conflict through negotiations may be at a time when US / NATO troops are in full force in Afghanistan.

Prolonged foreign military presence does not produce any different results. The NSC said that the ratification of the decision by the former Biden administration to withdraw troops was a logical consequence of the conflict.

Now is the time for the international community to work together to ensure a comprehensive political settlement for the long-term peace, security and development of Afghanistan and the region.

The prime minister had told Erdogan that the NSC would meet on Monday to discuss the situation. The two leaders will consult again after the meeting, to coordinate their efforts.

The Prime Minister reiterated Pakistan’s commitment to continue all efforts in support of a comprehensive political solution in Afghanistan.

FM Qureshi says that “Pakistan will recognize the Taliban government in due course”.

A day earlier, Foreign Minister Shah Mehmood Qureshi had made it clear that Pakistan had no favorites in Afghanistan and wanted to establish good relations with its neighbors.

Speaking at a press conference in Islamabad, the foreign minister had said that “in due course, Pakistan will recognize the Taliban government in accordance with international consensus, ground realities as well as Pakistan’s national interests”.

“Pakistan agrees that there should be no military solution to the Afghan problem and wants all issues to be resolved through dialogue,” he said.

Qureshi said he would soon discuss the Afghan issue with the leadership of neighboring countries, including China, Iran, Uzbekistan and Turkmenistan, adding that India should also work to resolve the Afghan issue.

He said the situation in Afghanistan was changing rapidly, but the Pakistani embassy in the country was functioning normally.

Qureshi said that Pakistan has always played and will continue to play the role of facilitator in Afghanistan. This is our neighbor, so we want to have good relations with it.

Towards the end of his press briefing, FM Qureshi said that the Afghan leadership must work together to find a solution that would save the lives and property of the Afghan people.