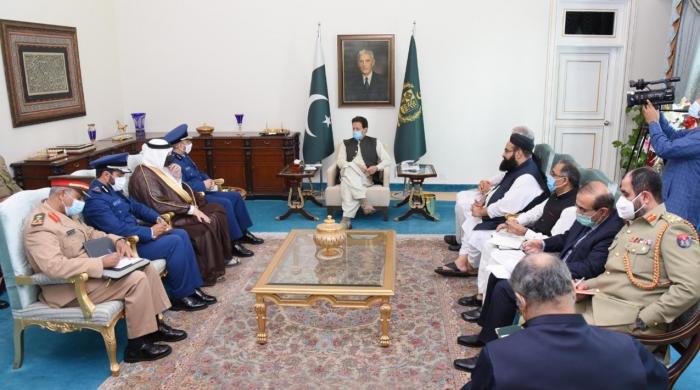 ISLAMABAD: The Chief of General Staff of the Saudi Armed Forces on Monday called on Prime Minister Imran Khan and discussed bilateral cooperation and fraternal relations between the two countries.

Prime Minister Imran Khan said that Pakistan was committed to maintaining the sovereignty and territorial integrity of Saudi Arabia.

He added that the Pakistani people have always admired and respected the Saudi leadership. He further said that Pakistan and Saudi Arabia have close fraternal relations.

The Prime Minister expressed his desire to further deepen and broaden the mutual cooperation between the two countries and also strengthen the ties between the people.

He expressed satisfaction over the defense relations between the two countries and added that he wished to increase cooperation in the years to come.

The Saudi general also acknowledged the cooperation and appreciated the professionalism of the Pakistan Armed Forces.

The situation in Yemen was discussed during the meeting and Prime Minister Imran Khan expressed support for resolving the dispute through diplomacy and dialogue. He praised Saudi Arabia’s role in resolving the Yemeni conflict.

The press release further said that the historic fraternal relations between Pakistan and Saudi Arabia are based on common beliefs, common history and mutual cooperation. Regular and high-level exchanges are a reflection of the relationship between the two countries.