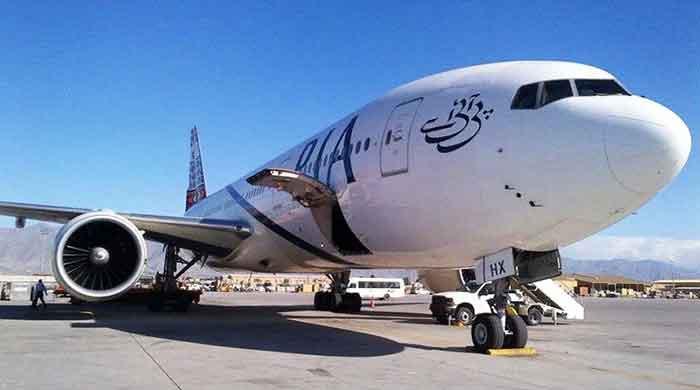 ISLAMABAD: To ensure the safety of passengers, their luggage and crew members, Pakistan International Airlines (PIA) on Monday suspended its Kabul flight operation as a large number of people were fleeing Afghanistan. Gathered on the way. Captured the capital, Geo News. Is informed.

A PIA spokesman said there was no security or staff at Kabul airport and a large number of people were crowded at the airport tarmac.

He said the airline made the decision in consultation with Afghanistan’s foreign ministry and civil aviation authority. The spokesman said the flight operation to Kabul would be suspended indefinitely.

The airline had today planned three flights between Islamabad and Kabul to bring back a large number of Pakistanis and other nationals seeking to leave Kabul.

United Airlines, British Airways and Virgin Atlantic had already cut off use of Afghanistan’s airspace when insurgents took control of the presidential palace in Kabul after US-led forces withdrew and Western nations repatriated their citizens on Monday. Made a fuss to get out.

The ACAA said any movement through Kabul airspace would be uncontrollable and it has advised surrounding flight information areas that control airspace.

Flight tracking website FlightRadar24 said on its Twitter account that the Air India flight from Chicago to Delhi had diverted and flew out of Afghan airspace shortly after entry, while the flight from Baku to Delhi The Terra Ave flight was also changing course.

The FAA said flights below 26,000 feet are prohibited in the Kabul Flight Information Region, which covers most of Afghanistan, unless operating inside and outside the Hamid Karzai International Airport. Citing the threat of militant activity. “

These sanctions do not apply to US military operations.

Other countries, including Canada, Britain, Germany and France, have also advised airlines to maintain an altitude of at least 25,000 feet above Afghanistan, according to the website Safe Airspace, which tracks such warnings. Is.

The ground chaos has also affected commercial flights to Afghanistan. The airline said on its website that the UAE had suspended flights to the Afghan capital Kabul until further notice.