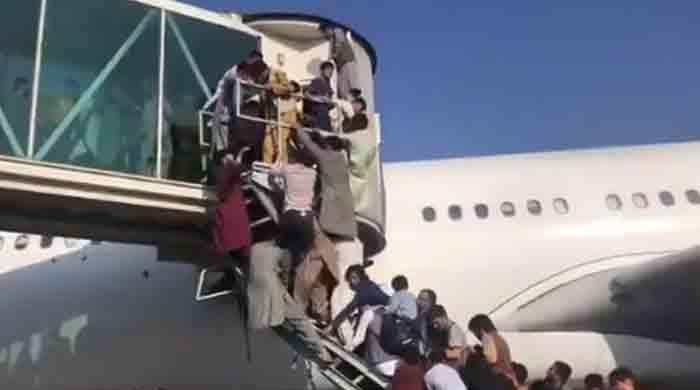 Some have criticized the State Department, which has full authority to issue visas to former spokesmen and other US military aid personnel and their families, for fearing for their lives to start the process for Afghans. Wait more than two months.

Videos posted on social networks showed scenes of panic in Kabul, including a crowd in front of a U.S. military transport plane as it tried to get off the taxi, with some trying to cling to it.

A military official, speaking on condition of anonymity, said: “We have been warning them for months, for months, that the situation is urgent.

“I’m not angry, I’m disappointed,” another officer remarked. “The process could have been handled differently.”

Biden decided in mid-April that all US troops should leave Afghanistan by September 11, although he later extended that date to August 21.

However, the State Department waited months to establish an ad hoc structure to secure US allies.

Another Pentagon official told AFP that diplomats had tried to speed up the visa process – but the process was long and complicated.

The Biden administration believed that the US embassy in Kabul would remain open and that the Afghan government would maintain control of the country for months after the US withdrawal.

As soon as Biden announced the withdrawal, the Pentagon said it was preparing for a massive withdrawal.

But by mid-June, the administration did not consider the evacuation necessary and backed the issuance of special visas – a process that could take up to two years.

In late June, the White House raised the possibility of expelling Afghan spokesmen before the end of the withdrawal, and asked the Pentagon for help.

A crisis cell was then set up at US bases to receive Afghan refugees as they waited for their visas to be issued.

During a press briefing on Monday, when asked about the two-month delay between the withdrawal announcement and the creation of the Crisis Cell, its director, Gary Reid, insisted that the Pentagon was only working in “State Department support.” Can

State Department spokesman Ned Price said that when the administration realized that the situation was “rapidly evolving”, it launched Operation Allied Refuge, which it called “a lot more than just processing, judging and issuing visas.” “It’s a big American effort. They are called special immigrants, but in fact they have to be brought to the United States with a large-scale airlift operation.

So far, 2,000 Afghans have been flown to the United States, he said.

Pentagon spokesman John Kirby said, “But you can go back in the spring and hear the Secretary of Defense (Defense Lloyd Austin) talk about interpreters and translators and the sacred responsibility that we know we have. Are together. “

“What you’ve seen in the last 48-72 hours is personal to everyone here at the Pentagon,” Kirby said of the images coming out of Afghanistan.

“Many of us have spent time in Afghanistan over the years and feel a deep connection to the current events,” US Army Chief of Logistics General Hank Taylor told a news briefing.

But, he added, “we are focused on the safest evacuation of Americans and Afghans.”