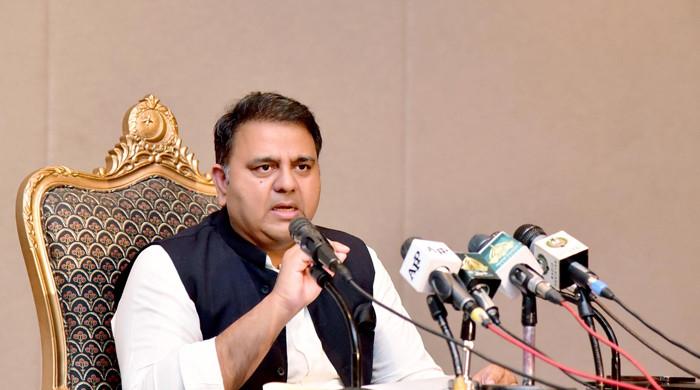 ISLAMABAD: Federal Minister for Information Fawad Chaudhry on Tuesday said that Pakistan would not take a unilateral decision to accept the Taliban government as it would be taken in consultation with other countries.

“We are in touch with other countries and will decide according to the world powers,” he said.

Fawad said the “peaceful” transfer of power in Afghanistan was a welcome sign, adding that Pakistan was in touch with allies on the changing situation in Afghanistan as Islamabad plays its part in bringing lasting peace to Kabul. ۔

Foreign Minister Shah Mehmood Qureshi had a telephone conversation with US Secretary of State Anthony Blinken yesterday – as part of Pakistan’s efforts to reach out to other countries on the situation in Afghanistan.

During the telephone call, FM Qureshi said Pakistan would continue to work with Washington and other international partners to promote efforts to support a peaceful and stable Afghanistan.

The federal information minister expressed hope that the Taliban would respect the human rights of Afghans. “It’s good to see that people didn’t suffer much (during the attack),” he said.

The Federal Minister for Information said that Prime Minister Imran Khan took the Cabinet into confidence over the rapidly changing situation in Afghanistan.

Moving towards the Single National Curriculum (SNC), the Information Minister said that the PTI had promised to implement uniform curriculum across the country before coming to power.

The day before, Prime Minister Imran Khan had launched the first phase of SNC for students in grades one to five in Islamabad, where he had said that a uniform curriculum was the real path to independence.

He said that for the first time modern curriculum has been implemented in madrassas, adding that Qur’an recitation is also being taught in schools.

The Information Minister said that the Prime Minister also wanted the students of 8th, 9th and 10th classes to learn about the Prophet of Islam (SAW).

Federal Minister for Inter-Provincial Coordination Fehmida Mirza has been directed to review the sports policy and bring a new policy.

The Prime Minister directed to change the existing sports system in the country and asked the Ministry of Youth Affairs and Sports to start work in this regard.

“The sports federation is not performing well and needs a complete overhaul,” the information minister said.

Talking about the federal government’s bid to cut spending, he said the amount spent on the Prime Minister’s Office and the Presidency has been reduced “rapidly”.

The expenses of the Prime Minister, the President and the Speaker have been reduced by billions of rupees. The Information Minister said that he mocked the Nawaz Sharif-led government for calling Jati Umrah a camp office.