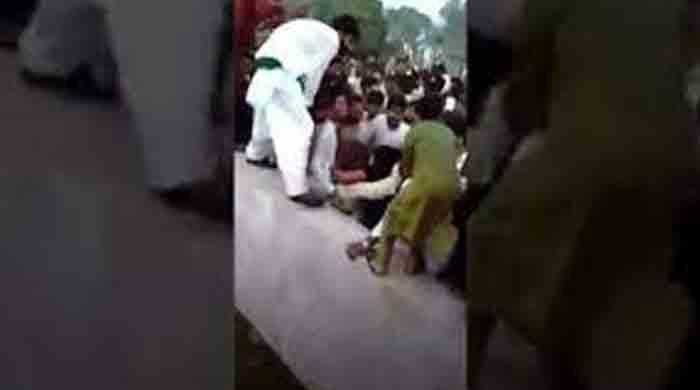 LAHORE: Condemning the Minar-e-Pakistan incident where a woman was attacked by a mob, Punjab government spokesman Fayyaz-ul-Hassan Chauhan on Wednesday said that all the accused involved in the incident would be brought to justice.

In a statement, Fayyaz-ul-Hassan Chauhan said that the culprits were being identified through video footage.

He further said that the attack on a woman in Greater Iqbal Park was a shameful act which had embarrassed the society.

The incident came to light when a video went viral on social media showing hundreds of men attacking a woman as she went to the park with four friends to celebrate Independence Day.

Police have registered a case against 400 people for attacking a woman who was making a tick-tock video in the park.

Bilawal demanded from the government that those responsible be brought to justice.

Meanwhile, PPP chairman Bilawal Bhutto has condemned the incident and asked the government to bring those responsible to book.

Every Pakistani should be ashamed of the attack on a young woman by a mob in #MinarPakistan. It speaks of decay in our society.

He said that those responsible should be brought to justice.

“Pakistani women feel insecure and it is everyone’s responsibility to ensure the safety and equal rights of all,” she added.

Police will take the case to a logical conclusion: DIG

While talking Geo PakistanDIG Investigations Sharq Jamal Khan said that the police was taking the case as a challenge and promised to bring it to a logical conclusion.

An investigation is underway after the case was registered, the police officer said. “We have videos and experts are analyzing because it’s a technical process to find out who was doing what.”

Sharq Jamal said that the case is very strong and he has also recorded the statement of the victim.

In another horrific incident of violence against women, a woman was attacked by hundreds of men in Greater Iqbal Park, Lahore.

The victim was making a tick-tock video in the park with her friends when an army of men of all ages climbed the fence and attacked the woman.

The victim told police that the men grabbed her, tore her clothes, beat her and threw her into the air. In addition, they robbed him of Rs 15,000, snatched his mobile phone and took off his gold ring and roots.

Of the hundreds of men, many who just stood there and even made a video, only one man came to the woman’s aid and helped her out of the park.

Meanwhile, Punjab Chief Minister Sardar Usman Bazdar has sought a report from CCPO Lahore on harassment of a woman in Greater Iqbal Park and directed immediate arrest of the accused.

The Chief Minister said that this was a very sad incident and it was the collective responsibility to provide justice to the affected woman.