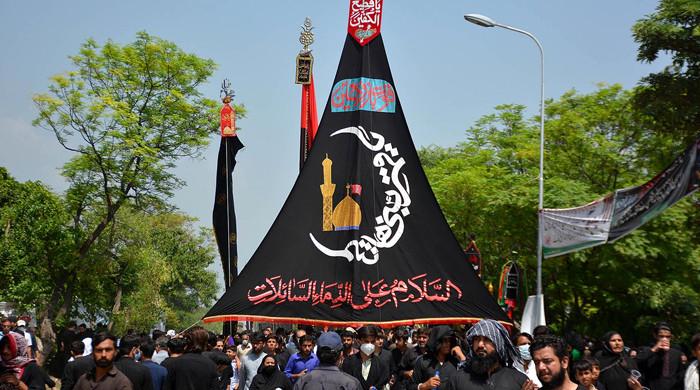 In remembrance of the martyrdom of Hazrat Imam Hussain (AS), the nation is celebrating Ashura Day, 10th Muharram today (Thursday) under tight security. Many mourning processions have been taken out across the country.

The government has shut down mobile service in major cities of the country including Karachi, Hyderabad, Quetta and Sukkur to avoid any untoward incident.

This is the second Ashura in the country to be celebrated in the shadow of the corona virus.

The main procession route in Karachi is from Nishtar Park to Hussainar Irani to Kharadar. Allama Shahenshah Naqvi is addressing the procession.

Participants in the procession will offer prayers at the Tibet Center, while all roads leading to MA Jinnah have been sealed off to provide security for the procession.

The processions will start at 9 am in Hyderabad and Jhang, 10 am in Faisalabad and 11 am in Gujranwala and Rohri and 12 noon in Sukkur and Khairpur.

The processions in Quetta and Dera Ismail Khan started at 8 am and 7:30 am respectively.

Standard Operating Procedures (SOPs) for mourning processions have also been issued to prevent the spread of the corona virus, as the country’s fourth wave of epidemics has led to an increase in cases.

According to a report by Radio Pakistan, strict security arrangements are in place and all security departments have been alerted to prevent any untoward incident.

Of the President and the Prime Minister. Messages

On the occasion, President Dr Arif Alvi said that the martyrdom of Hazrat Imam Hussain (RA) is a symbol of determination and perseverance and urged the nation to rise above hatred, enmity and sectarianism in accordance with his teachings.

The President said that we have to prepare ourselves for all kinds of sacrifices by becoming a metaphor of determination and stability for our religion, nation and country.

President Alvi said that following such a path leads to success in this world and in the hereafter, as he highlighted that Ashura has a special place in the hearts of the Muslim Ummah.

President Alvi said that the grandson of the Prophet of Islam (SAW) along with his family and other devoted companions sacrificed their lives fighting the forces of oppression and tyranny.

He said that eternal sacrifices revived the spirit of Islam and even today such a role was a source of inspiration for the believers in times of trial and tribulation.

He said that the best way to pay homage to Hazrat Imam Hussain (RA) is to pledge to live according to his teachings.

In the midst of the fourth wave of COVID-19, he said, the nation should take precautionary measures, especially during Ashura gatherings and processions.

He urged the people to take precautionary measures and SOPs issued by the government and get vaccinated for their own protection.

Prime Minister Imran Khan urged his compatriots to pay homage to Hazrat Imam Hussain (RA) while upholding justice and truth, and to thwart any ploy of lies as the nation celebrates Ashura. ۔

In his message to the nation on the occasion of Ashura, the Prime Minister said that Iman Hussain (RA) proved by his actions that man should always stand by the truth and should never hesitate to sacrifice his life for any cause.

He said that after refusing to accept Yazid’s aggression, Imam Hussain was martyred along with his companions.

The Prime Minister said that Imam Hussain preferred martyrdom to bowing to oppression.

The Prime Minister said that Ashura Day was an important day even before the advent of Islam but due to the sacrifice of Imam Hussain (RA) its importance increased manifold.

He said that the martyrdom of Imam Hussain was a tragedy that was hurting Muslims despite the passage of centuries.

The Prime Minister said that Iman Hussain has become a symbol of strength against falsehood and a source of strength for all movements fighting against oppression in the future.

“The war between truth and falsehood has always been and will continue to be, but we must always stand for truth and justice,” he said.

He also advised his compatriots to ensure implementation of anti-cowardly 19 SOPs to protect the country from the epidemic.

With additional input from the app.