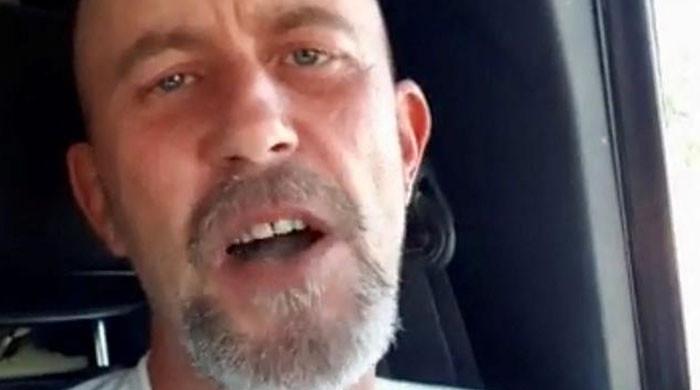 WASHINGTON: A man who threatened to drop a bomb on Washington’s Capitol Hill surrendered to police on Thursday, ending an hour-long standoff that left lawmakers in a state of shock following the January pro-Trump uprising.

The incident triggered a massive evacuation and police response and sent shockwaves through a city that had been on high alert for months, as political tensions escalated following the deadly riots in the US capital.

The suspect, a right-wing extremist identified by authorities as Floyd Roseberry of North Carolina, was broadcasting live from his truck on social media, attacking President Joe Biden and Democrats. Yes, warning of a “revolution” and a complaint about the US government and its policy in Afghanistan

He also claimed that four more sets of explosives were waiting in Washington and that a bomb would be detonated if police used lethal force against him.

Most parts of the complex were cordoned off as officers and FBI agents spoke to the driver, who police said had a detonator in his hand.

Suddenly, after four hours of drama, it was over.

“He got out of the car and surrendered, and the tactical unit that was close to him was taken into custody without incident,” U.S. Capital Police Chief Thomas Menger told reporters.

A subsequent search by law enforcement found no car bomb on the sidewalk in front of the Library of Congress, but possible bomb-making equipment was collected from the truck, the USCP said in a statement. has been.

The manager said it was not clear what Roseberry’s motives were, but on his Facebook live stream, he issued a series of contradictory threats and asked the president to speak.

“I’m trying to get Joe Biden on the phone. I’m standing here on the sidewalk with this beautiful thing,” said a bald man with a white tea-wearing goat with salt and pepper. Shirt

“I’m not hurting anyone. I’m not provoking it. I can’t,” he said. “I’m telling you, those snipers come in, they shoot out of this window, this bomb is going off.”

Direct Feed showed the Roseberry in his car with a metal cylinder with mud on top and a box with buttons and wires, but it was finally decided that this was a workable explosive device. do not have.

Although he did not claim political affiliation, he once referred to the “revolution” and said: “I am looking for all my other patriots to come out and help me.”

A White House official said Biden had been told of the impasse.

As authorities revealed the threat, the library of the main buildings of Congress was evacuated, as was one of the nearby U.S. Supreme Court and at least three House Office buildings.

Roads and buildings were reopened and public transport resumed when police clarified everything.

– ‘Threat to every community’ –

Both the Senate and House of Representatives are currently on vacation, but some lawmakers have lived in Washington and are working in the staff complex.

House Democrat Bill Pascal strongly condemned the suspect during the standoff, in comments that echoed the shock of the January uprising.

“A right-wing extremist is now threatening to bomb the US capital,” he tweeted. Right-wing domestic terrorism is a threat to every American community.

Tensions have been running high for more than seven months since the January 6 riots, when supporters of then-President Donald Trump stormed the US capital, clashed with police and tried to block verification of the presidential election.

In April, a man rammed a car into a Capitol barrier, killing an officer before shooting the attacker.

On Thursday, lawmakers sent messages of appreciation to the police officers assigned to secure the Capitol area.

“They’ve been through a lot this year, and yet they stand up for our democracy,” said Senator Martin Heinrich.