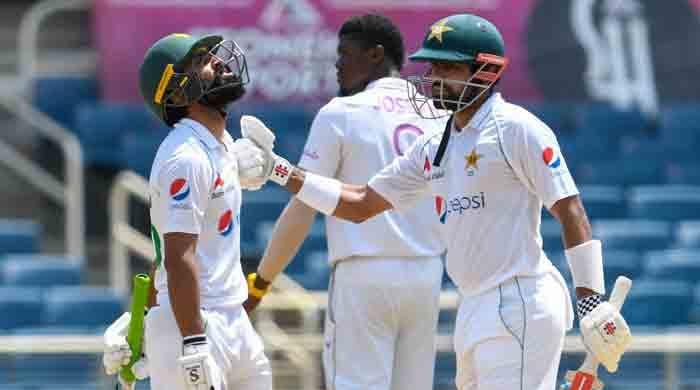 Pakistan cricket team captain Babar Azam has expressed hope that his team will get out of trouble and meet the targets set for the second day of the Test match.

Babar Azam said that we will achieve the targets as Muhammad Rizwan and Fahim Ashraf are still on the crease.

The 26-year-old right-handed batsman added, “Our goal is to score between 300 and 350 in the first innings.”

The captain said that Sabina Park was supporting the pitch bowlers at the beginning of the game, however, Fawad Alam gave his full support after losing the first three wickets.

Babar Azam said, “Both of us.” [I and Fawad Alam] Decided to stay on the crease longer. “

I told Fawad Alam that we have to have a long-term partnership to get the team out of trouble.

“So we set a target session after the session while keeping an eye on 300-350 in the first innings,” he added.

Azam said he was working hard to improve his performance in the long format of the game. He expressed happiness at the fruits of his labor.

The captain praised his teammate Fawad Alam and said that other cricketers should learn from how to perform in difficult times.

He said that Fawad Alam is in excellent form and he is playing excellent cricket.

Babar and Fawad took Pakistan out of a ‘terrible beginning’

AFP added: Babar Azam lost a century but Fawad Alam may still have a chance to reach three as the pair ended the second day at the end of the second Test against the West Indies after a terrific start to Pakistan. At the end of the day, Sabina Park scored 212 for four. on Friday.

Babar composed 75 on the crease for about five hours and after Fawad retired from the pain of his usually severe legs, the tea saved the tourists from the depths of two to three.

Kemar Roach once again led the charge for the home side, taking three wickets for 49 runs in 17 overs in the first two overs of the match.

He then returned to take Babar’s most important wicket in the final session when the Pakistani captain was calmly moving towards his sixth Test century.

His fourth-wicket partnership with Fawad was worth 158 when the bizarre left-hander was limped off a field in the Jamaican capital on a hot afternoon with a temperature of 34 degrees.

The dilapidated condition also claimed West Indies wicketkeeper Joshua da Silva, who was given a place by Jahmar Hamilton for the rest of the day when the first-choice glove wearer left the field just before tea.

Despite Babar’s dismissal and Fawad’s temporary loss, Pakistan are on a challenging first-innings score with Mohammad Rizwan and Faheem Ashraf set to resume their fifth-wicket partnership on the second morning, adding 44 runs. ۔

This promising position was quite the opposite, even though Pakistan found itself in a situation where they were falling to three for two in just four overs a day.