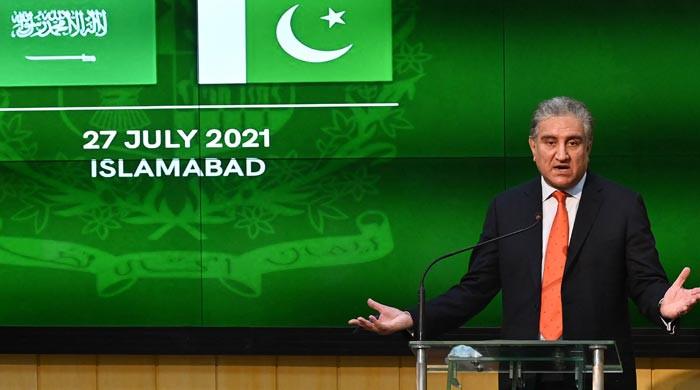 A statement from the Foreign Office said that Foreign Minister Shah Mehmood Qureshi had sought traditional support from the Muslim Ummah for Afghans in search of a peaceful, united, stable and prosperous country.

The Foreign Minister stressed the need for the international community to stay engaged with Afghanistan – through the country’s economy, reconstruction, rehabilitation and humanitarian assistance.

Qureshi emphasized that Pakistan would continue to play a constructive role in promoting lasting peace and stability in Afghanistan.

Expressing hope that the Afghan parties would work for a comprehensive political settlement, the Foreign Minister said that the success of the talks in Kabul would benefit not only Afghanistan but also the region.

Noting the importance of efforts to form a comprehensive government, the foreign minister warned of spoilers inside and outside Afghanistan who want to take advantage of the situation in the country, the statement said.

The Foreign Minister highlighted Pakistan’s role in the evacuation and relocation of diplomatic missions, international organizations, media and others from Afghanistan.

Shah Mehmood Qureshi expressed the hope that the talks in Kabul would be successful, resulting in a comprehensive and participatory government that would bring lasting peace, development and prosperity to Afghanistan.

Al-Uthaymeen, meanwhile, briefed Qureshi on the extraordinary meeting of the OIC executive meeting convened yesterday at the level of ambassadors and permanent representatives in Jeddah to discuss the situation in Afghanistan.

Qureshi spoke to his Turkish counterpart about Afghanistan.

The Foreign Minister said that the recent visit of President Arif Alawi to Turkey for the inauguration ceremony of Muljam Naval Ship further strengthened the bilateral cooperation.

The Foreign Minister added that Pakistan’s National Security Committee (NSC) has emphasized the importance of peace and stability in Afghanistan for Pakistan and the region.

The Foreign Minister also briefed his Turkish counterpart on Pakistan’s facilitating role in the evacuation of personnel from embassies, international organizations, media outlets and others.

According to the statement, Foreign Minister Cavusoglu praised Pakistan’s role in the current situation and thanked Qureshi for facilitating Turkey’s evacuation efforts.

The two foreign ministers agreed to work closely on the situation in Afghanistan, the statement added.

Qureshi discussed the Afghan situation with his Russian counterpart.

Qureshi emphasized that a peaceful and stable Afghanistan is of paramount importance to Pakistan and the region, and that Pakistan has consistently supported the Afghan peace process.

He further said that Pakistan and Russia have made valuable contribution in these efforts as part of Troika Plus, the statement said that the two Foreign Ministers agreed to continue working together through Troika Plus format.

The statement added that a comprehensive political settlement was the best way forward for peace and stability in Afghanistan. Pakistan is fully supporting the efforts in this direction.

The Foreign Minister briefed his Russian counterpart on Pakistan’s access to regional countries so that consultations could be held to address the challenges posed by progress in Afghanistan.

Qureshi also told his counterpart Lavrov that Pakistan was facilitating the evacuation of its diplomatic staff, staff of international organizations, media and others at the request of several governments.

On the bilateral plane, Qureshi expressed satisfaction over the upward trend in Pakistan-Russia relations. He reiterated the government’s commitment to implement the agreement on the Pakistan Stream Gas Pipeline project as soon as possible.

The statement added that the two Foreign Ministers agreed to enhance bilateral cooperation in various fields, enhance high-level exchanges and stay in close touch on issues related to Afghanistan.