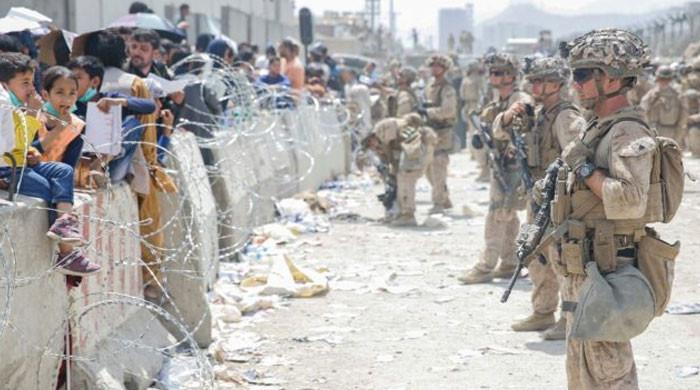 KABUL: The United States and its allies on Saturday raced against “time and space” in a rapidly chaotic and dangerous attempt to evacuate people from Taliban-held Afghanistan, with the European Union warning that everyone could be on time. Getting out is “impossible.”

Even six days after the Taliban came to power, thousands of people were still trying to flee the country, known as the most difficult plane in history.

As frustrated people, including children, wait for hours and days in the heat and are crushed outside the US-controlled Hamid Karzai International Airport, the delay has become deadly for some.

Britain’s Sky News broadcast footage of at least three white tarpaulin-covered bodies outside the airport on Saturday. It was not clear how he died.

Airport reporter Stuart Ramsay called the deaths “inevitable” and said some in front of the crowd were being “crushed” while others were “dehydrated and frightened”. ۔

The footage was the latest in a string of disappointments, following a video of a child being lifted off a wall at the airport and horrific scenes of people hanging on departure planes.

Families hoping for a miracle are crowded amid barbed wire encircling an unofficial plot of land separating the Taliban from US troops. Roads leading to the airport resounded with traffic.

“Please, please help me … where should I go, what should I do,” said a man who said he worked for the US embassy in the mid-2000s. How to get out of the group to share information with people

“We know we are fighting against both time and space,” he said.

Others saw it as another losing battle.

“They want to evacuate 60,000 people between now and the end of this month. This is mathematically impossible,” said Joseph Borrell, the EU’s foreign policy chief.

Speaking to AFP, Borrell added: “We have complained to the Americans that the security at their airport was very tight and that there were obstacles to the efforts of Afghans who worked for the Europeans.”

“The planes are leaving while people are still on torque,” he said.

Biden has said the deadline for aircraft could be extended. “As far as I know, no decision has been made yet,” Borrell said.

The United States has urged its citizens in Afghanistan to avoid the airport, citing “potential security threats” near its gates.

A White House official later confirmed that aides had briefed President Joe Biden on “counterterrorism operations” in Afghanistan, including against the ISIS group, which is active in Kabul.

15,000 Americans need to be evacuated and the administration hopes to evacuate another 50,000-60,000 Afghan allies and their families. Other countries are hoping to save thousands.

The Pentagon said Saturday that 17,000 people had been evacuated since the operation began on August 14, including 2,500 Americans.

Outside the airport, Taliban leaders gathered in the Afghan capital on Saturday to begin mapping out a “comprehensive government.”

A senior Taliban official told AFP that Mullah Abdul Ghani Baradar – who co-founded the group – would meet with jihadi leaders, elders and politicians in the coming days.

But the gathering also included senior officials from the Haqqani Network, a US-designated terrorist organization whose leadership has a ڈالر 1 million reward.

The mountainous valley of Panjshir remains the only stronghold against the Taliban since the Taliban took over Afghanistan.

But, on Saturday, pro-Taliban social media feeds posted a video of the Haqqani Network’s Khalil Haqqani claiming that Masood’s son had declared “allegiance” to the new Islamic Emirate.

No statement has been made by Masood.

He has promised “positively different” rule from his 1996-2001 rule, notorious for its radical interpretation of Islamic law, and not taking revenge on Afghans working with the US-backed government. What is the promise?

But an intelligence document for the United Nations says militants are going door-to-door hunting down former government officials and those working with US and NATO forces.

The Taliban shot dead a Deutsche Welle journalist while searching for him, according to a German public broadcaster.

Taliban militants prevented government employees from returning to their offices in Kabul on Saturday.

There was a scene of routine in the capital that made the chaos and fear around them a reality: the Afghan national cricket team was pictured during a training session in Kabul on Saturday.

He is scheduled to meet Pakistan for a one-day series in Sri Lanka in two weeks.