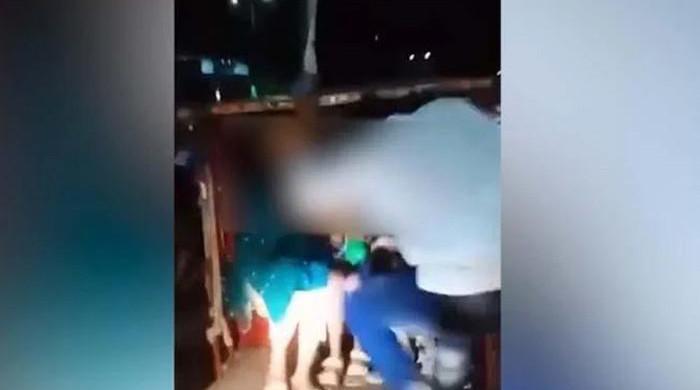 Punjab government spokesman Fayyaz-ul-Hassan Chauhan said on Saturday that police had identified the man who harassed and forcibly kissed a woman near Greater Iqbal Park in Lahore.

However, Lahore police have not yet arrested the culprit Geo News. Is informed. A case has been registered at the Lari Ada police station following a complaint by a police station house officer (SHO), when police were shown a video of the incident which went viral on social media.

He quoted Ghani as saying that a special team has been formed for the case which will use all available modern, scientific methods to identify the culprits.

“We will trace them in a day or two and make arrests later,” the spokesman said.

Chauhan said he could not confirm that the culprit had been arrested, but assured the nation that the man had been identified through CCTV cameras.

“An example will be set from this morally unbridled man so that next time no one dares to harass a woman – who could be a mother, daughter or sister,” Chauhan said.

The spokesman said that the provincial government would not show any negligence in arresting the person involved in the heinous act.

According to the FIR, the incident took place on Circular Road near Gate No. 1 of Greater Iqbal Park towards Chand Chowk.

The FIR estimates that 10-12 “morally unruly” men on motorcycles harassed two women on a Changchi rickshaw, with a child sitting between them.

The FIR states that the video shows motorcyclists hunting rickshaws, dragging women and hanging them.

“A man, wearing a white shirt and blue jeans, jumped on the rickshaw, forcing one of the women to kiss him on the cheek and tore his clothes,” it said.

Meanwhile, other men were constantly “stubborn, calling, and leaning towards women and making obscene gestures.”

The video also shows a woman taking off her slippers and threatening to kill a motorcyclist. A woman who had been harassed, at one point, became very upset and desperately tried to leave the rickshaw but was stopped by her partner.

The case has been registered under section 354. 509 (ii) of the Pakistan Penal Code (word, gesture or act intended to insult a woman’s decency), 147 (punishment for rioting), and 149 (every member of an illegal assembly committing a common good) Perpetrator).

Reacting to the incident, Punjab Chief Minister Usman Bazdar directed the provincial police chief to submit a report and arrest the accused as soon as possible.

The incident comes at a time when Pakistanis, especially women, are already on the brink when a video clip of a woman being attacked and harassed at Minar Pakistan on Independence Day went viral on social media.

The woman, a Tuck Talk star, said the men grabbed her, beat her, and threw her into the air for two and a half hours.

Police today said they have arrested 66 people for their alleged involvement in the attack on Tuck Tucker.

Deputy Inspector General (Investigations) Sharq Jamal said he had so far questioned more than 300 people in the case. More than 100 of them were detained for further questioning, the police officer said, adding that their whereabouts were known that day using geo-fencing and face-matching.

A total of 400 cases have been registered against them.