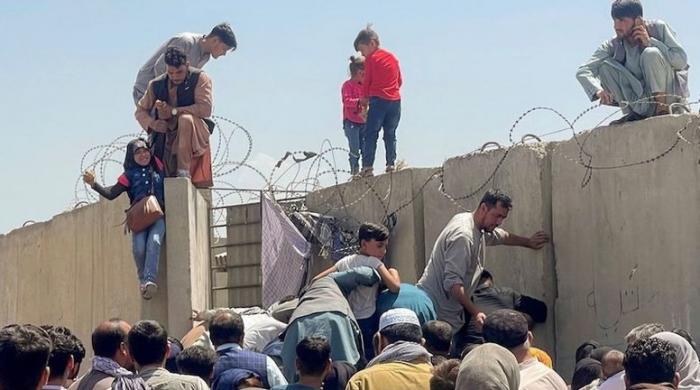 The U.S. embassy in Kabul on Sunday warned its citizens not to travel to Kabul airport, citing “potential security threats.”

A week ago at Hamid Karzai International Airport, there was chaos among people hoping to escape Taliban control.

As thousands of Americans and Afghans wait for flights at the airport or gather outside its gates in panic, there are Pentagon-certified Taliban fighters or other militants harassing people trying to kill and flee. Has received “sporadic” notifications.

A warning issued by the US Embassy in Kabul said: “We are advising US citizens to refrain from traveling at the airport and to avoid the airport gates unless you have a request from the US government. No individual instructions were received from the representative. “

The warning did not elaborate on the threat, but a White House official later said that aides had briefed President Joe Biden on local “counterterrorism operations, including against ISIS.”

“This morning, the president met with his national security team … they discussed the security situation in Afghanistan and counter-terrorism operations, including ISIS,” the official said.

Khurasan is known as the Islamic State

According to Biden, 15,000 Americans need to be evacuated from Afghanistan, which the administration says wants to evacuate at least 50,000 Afghan allies and their families.

Pentagon spokesman John Kirby said the military was working to complete an immediate withdrawal from Kabul by the end of August.

“We have been very honest about the fact that we know we are fighting against both time and space,” he said.

US Major General Hank Taylor said 17,000 people had been evacuated since the operation began on August 14, with many first going to Qatar or Kuwait. A total of 2,500 Americans were involved.

He added that six military C-17s and 32 charter flights had departed from Kabul airport in the last 24 hours with 3,800 people on board, a sharp decrease from the previous day.

On Friday, the U.S. military sent helicopters to rescue more than 150 Americans who could not reach the airport gates, an official said.

Biden has promised to help every American in Afghanistan who says: “Any American who wants to come home, we will take you home.”

But he also acknowledged that the presence of thousands of US troops at the airport did not guarantee a safe passage from Kabul.

In a telephone briefing on Sunday, senior Canadian government officials described the situation around the airport as “weak, chaotic and depressing”.

He said Canadian troops had evacuated about 1,000 Afghans, adding: “This is a dangerous mission.”

Former President Donald Trump, who was not defeated by Biden in the 2020 election, criticized his successor for the “dilapidated withdrawal” of US troops from Afghanistan.

He called the Taliban “great negotiators, tough fighters” during a rally in Alabama.

Trump signed an agreement with the Taliban that, under conditions, would result in the complete withdrawal of US troops by May.

It also released Taliban founder Abdul Ghani Baradar from a Pakistani prison, the highest profile leader of the movement seen in public since the fall of Afghanistan.