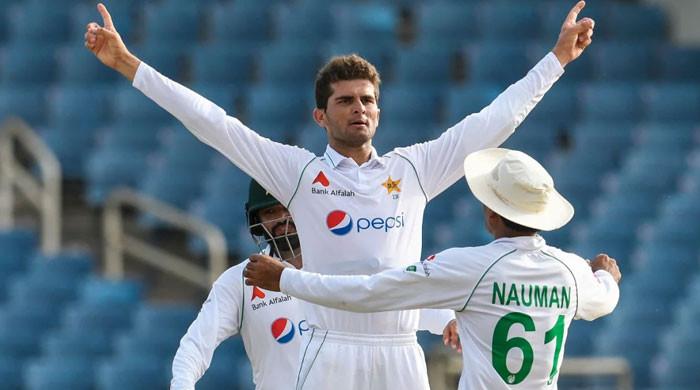 KINGSTON: Shaheen Shah Afridi claimed a career-best six for 51 in the first innings to beat West Indies by just 150 runs as Pakistan took full control of the second Test of the two-match series on the fourth tea on Monday. In Sabina Park.

The tourists’ first innings resumed at 39 for three in reply to 302 for nine, the home side lost their last six wickets for 45 and were dismissed shortly after lunch as the 21-year-old Shaheen strengthened his strength in the Caribbean. Dominance of batsmen

He took his wicket tally to 14 in the series, and on Tuesday, the last day of the series, with the possibility of his last leaning on troubled opponents.

In search of quick runs in pursuit of a big lead before the end of the game, to set the stage for an equal victory in the fifth day of the series, Pakistan won by 107 for three.

This gave them an overall lead of 259 runs and captain Babar Azam is expected to include first-innings century Fawad Alam at the start of the last session of the day.

Although Shaheen bowled impressively, it was Mohammad Abbas who started the day with a three-wicket haul in the last half hour of the morning session as the West Indies fell from 105 to 4 and from 116 to 8. ۔

Abbas, who went without a wicket before the spell, edited top-scorers Nekrma Bonner (37) and Kyle Myers on consecutive balls of wickets, both before wicketkeeper Mohammad Rizwan’s catches, Joshua da Silva to L.A. Added to his wicket via BW Root. End before lunch.

Shaheen, who quickly eliminated night watchman Alzari Joseph at the start of the day, took wickets at 33 in the afternoon at the hands of Fawad Alam, who was diving in the street to Gemini Blackwood.

Bonner and Blackwood shared a 60-run stand for the fifth wicket in the only period of the game when Pakistan’s bowlers appeared to be growing frustrated.

However, the effort did not last long and after taking the first two wickets of the innings late on the third day, Shaheen caught Rizwan off Jason Holder’s bold hit and caught Kemar Roach at mid-on to complete an effective mopping. ۔ Start work early in the afternoon.

Abbas’s accuracy proved to be the best sheet for the Shaheens when he scored three runs for 44 runs.

Both fell before the break, with Abid hitting Joseph 29 and Imran Myers 37

Braithwaite gave the last laugh as Azhar swept the part-time bowler which proved to be the last ball of the most fruitful session for Pakistan.