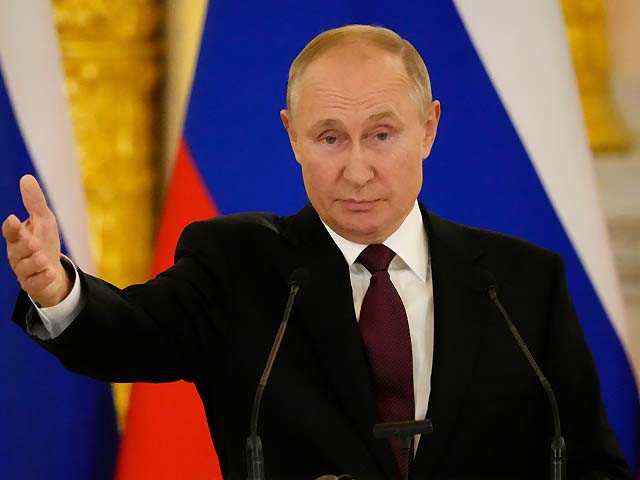 Some in the United States are already protesting the Pentagon’s bombing of military equipment that the Taliban have just seized.

Russian President Vladimir Putin explained his position on the Taliban during a news conference with outgoing German Chancellor Angela Merkel during a farewell visit to Moscow. The Eurasian superpower has established practical ties with the group, which, despite hosting them on several occasions as part of the Afghan peace process, still officially declares them terrorists. Here is an excerpt from the event:

“Because of the rapid developments in Afghanistan, we have made this a priority. The Taliban are now controlling almost the entire territory of this country, including their capital. That is a fact, and we have to move beyond that fact. Because we are trying to avoid the collapse of the Afghan state, it is important to end the irresponsible policy of imposing foreign values ​​on others, regardless of historical, national or religious characteristics, and the “patterns” of other nations. According to him, the desire to build democracies in other countries should be eliminated

We know Afghanistan, and we know very well how this country works and have had the opportunity to know to what extent it is the result of an attempt to impose extraordinary forms of government or social life on it. ۔ There has never been a time when such social and political experiments have been successful. It is only to destroy the states and their political and social fabric. At the same time, we see that the Taliban have already ended hostilities and are now working to ensure discipline, promising security for locals and foreign missions. I hope things go the same way.

The international community must keep a close eye on these developments, and the UN Security Council must play a coordinated role. There is another point I want to make in this regard. We believe that at this time it is important to prevent all types of terrorists from spreading to Afghanistan’s immediate neighbors, including under the guise of refugees.

As can be seen, the Russian leader reaffirmed that the Taliban – which he hopes will act on his words to act responsibly – is under the control of Afghanistan and therefore the international community. We must work with it to prevent the demise of this country. They should not continue the destructive policy of interfering in its affairs. Russia will also continue to protect its Central Asian allies from the influx of uncontrolled refugees and terrorists.

This is exactly the policy that all other stakeholders should follow. Although they still call the Taliban terrorists, the group has vowed to sever ties with international terrorist groups, respect the rights of minorities and women, and not seek retaliatory justice against the Afghans who occupy them. Cooperate with Everyone deserves a chance to see if he is sincere.

Western countries do not agree with the Taliban’s strict interpretation of Islam and its impact on the vision of society. This is understandable because even the Taliban do not agree with their liberal democratic social and political models. The solution is for everyone to respect each other’s right to develop their country according to their national traditions, rather than imposing their views aggressively on the other.

According to their traditions, the Taliban want to be alone for the development of Afghanistan because this group understands them. Although this vision will sincerely reflect the will of the majority of the country, President Putin’s observation that the group has ended hostilities and wants to return to order shows that it is opposed to this extent. Not doing that would point to the existence of significance. Opposition

This result contradicts the liberal democratic ideology of the West, which preaches the conceptual universality of its liberal democratic social and political model. In fact, this model is not enthusiastically accepted by most non-Western cultures because it goes against their historical traditions and sometimes foreign powers use weapons to destabilize their countries through hybrid warfare. Used

External implementation of the foreign socio-political model, whether through conventional military force or non-traditional means such as the colorful revolutions run by NGOs, will inevitably destabilize the targeted country. It doesn’t matter if the question is the West’s Liberal Democrats or the former USSR’s Marxist-Leninist model, what President Putin said is true for Afghanistan and every other country in the world.

To speak for it in this way shows the political maturity that is missing from many Western leaders. He acknowledges the fundamental sin of his predecessor in Afghanistan, which was to aggressively impose its former model on the country. Many Western leaders will never admit that they were wrong about destructive attempts to do exactly the same thing with their own models in Afghanistan, Iraq, Libya and Syria.

Furthermore, the Russian leader’s proposal to the UN Security Council to oversee events there speaks of his sincere commitment to international law, which is another feature that many Western leaders lack. The one-sided sentiments of their past are responsible for the destruction of many countries, and each time Russia reminded them that the tragedies they were responsible for were due to the illegality of their actions.

If the world’s leading countries had coordinated their response to global crises (whether what happened after 9/11 was objective or artificially fabricated with reference to Iraq, for example), perhaps history It would have been completely different. That is why it is so important for the permanent members of the UN Security Council to act responsibly when they see progress being made in Taliban-led Afghanistan.

Some in the United States are already protesting for the Pentagon to blow up billions of dollars worth of US military equipment that the Taliban have just confiscated, but this would be a devastating attempt to “save face” because it would only lead to ISI. SK will be strengthened. That terrorist group is the biggest threat to regional security, and it is only the Taliban who are stopping them in Afghanistan and preventing them from expanding to other countries.

It is an extraordinary blow to the American group that it sees the same group that still officially considers terrorists using their country’s state-of-the-art military equipment, but the Taliban swear by ISIS. Carriers are enemies, which Biden acknowledged during Friday’s speech. Undermining the Taliban’s counter-terrorism capabilities would therefore endanger the entire region, although this may be Machiavelli’s goal.

Therefore, Russia should make every effort to prevent the United States from doing so. Under no circumstances should the United States be allowed to bomb its military equipment, which the Taliban have just seized. The group has never been interested in foreign expansion, unlike ISIS, so it is in the wider security interests of the region for the Taliban to retain control of the equipment to fight these terrorists.

Moscow could eventually fail because it is unlikely to threaten any significant consequences if it once again acts unilaterally against Washington, but Russia could at least warn the world in advance that if How detrimental it would be to global security if the United States stopped doing so. That. To that end, it could also alert US Western allies to a potential refugee crisis that could eventually lead to it.

It would be a clever way to play on their liberal democratic beliefs as many of these same countries today, out of curiosity against their own ideological beliefs, refuse to accept as many unlimited numbers of Afghan refugees as possible because most of their societies Due to the strong public reaction to the 2015 Middle East migrant crisis, it would be in their best interest not to have another refugee crisis at all.

Although one is already happening at Kabul Airport, if the United States destroys US military equipment seized by the Taliban and therefore “passively facilitates” the rise of ISIS throughout Afghanistan “Then everything will get much worse.” The pretext for “regional security” will be hollowed out because none of Afghanistan’s neighbors have expressed concern about the group’s seizure.

They all fear the influx of uncontrolled refugees and ISIS-K, not the Taliban, with whom they have established political ties over the past few years. President Putin’s pragmatic stance on the group is expected to inspire more members of the international community in the West to treat the Taliban differently at this time and thus put pressure on the United States to end the withdrawal. Don’t attack him later.