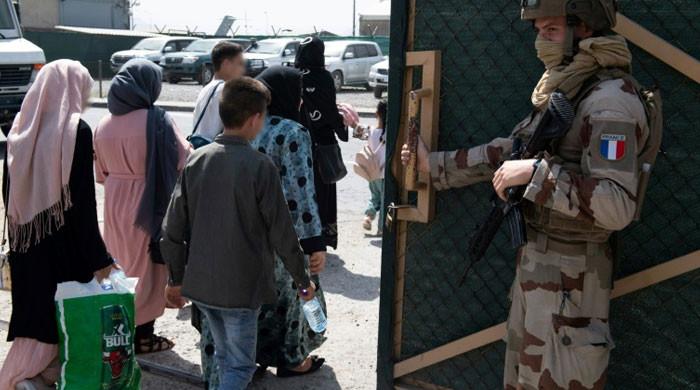 KABUL: Afghans rushed to escape Taliban rule on Thursday, but Western officials said the group had assured them that some evacuations would be allowed after the US withdrawal deadline next week.

More than 80,000 people have been evacuated since August 14, but large crowds are outside Kabul Airport in the hope of reprisals and repression in Taliban-led Afghanistan.

US Secretary of State Anthony Blankenship said Wednesday that the Taliban had promised to allow Americans, Afghans and people from other countries to leave, even after Tuesday’s cut-off.

“It is their responsibility to uphold that commitment and to provide a safe passage for anyone who wants to leave the country,” Blinken told reporters.

He added that at least 4,500 of the 6,000 Americans who said they wanted to leave Afghanistan had already left.

Blanken said hours after the German ambassador in Kabul that a Taliban negotiator had assured him that Afghans with valid documents could leave after the deadline, which was confirmed by US President Joe Biden on Tuesday.

Washington and its allies have flown thousands of Afghans daily on military transport, but it has become a difficult and frustrating task.

Many Afghans fear the five-year Taliban regime was overthrown in 2001, as well as violent retaliation for working with foreign militants, Western missions and the former US-backed government.

The Afghan capital’s airport is in turmoil as US-led troops try to maintain a safe haven for evacuation flights, surrounded by frustrated Afghans.

Some have foreign passports, visas or the ability to travel, but most do not. At least eight people have been killed in the chaos.

“Does anyone … anyone have contact inside the airport,” an American in a WhatsApp group asked how people can access the airport.

The Taliban have also been accused of blocking or slowing access to those trying to reach the airport, although they have denied the allegations.

Biden said the Taliban were stepping in to help, but there was also a “severe and growing threat” of an attack by a regional chapter of the Islamic State jihadist group.

Despite the gruesome scenes at Kabul airport, the Taliban have rejected an extension of next Tuesday’s deadline for the withdrawal of foreign troops, calling it a “red line”.

Taliban spokesman Zabihullah Mujahid said they had planes, they had an airport, they should evacuate their citizens and contractors.

Turkey, which has more than 500 non-combat troops stationed in Afghanistan, said on Wednesday that it had begun withdrawing its forces.

The evacuation signaled a clear abandonment of plans to secure Kabul’s strategic airport after the US departure.

European countries have warned that they will not be able to evacuate all at-risk Afghans to the airport before August 31.

“If (evacuation) continues for a few more days, it will not be enough,” German Foreign Minister Heiko Moss told Blood TV.

Difficult evacuation deadlines present a further complication that can reduce the number of daily evacuations.

But the German ambassador in Kabul said a Taliban negotiator had assured him that Afghans with valid documents would be allowed to leave even after the deadline.

The United States has deployed new troops for the evacuation.

In addition to the more than 6,000 troops, hundreds of US officials, 600 Afghan troops and equipment will have to be sent out.

To do so by August 31, the Pentagon said operations would have to begin a few days in advance.

In the wake of their world-wide power victory, the Taliban are still content to allow the US-led operation to continue, rather than focus on strengthening control and forming a government.

He has vowed a different, more inclusive government this time around, offering general amnesty to opponents.

A relief worker in Khost, a highly conservative area in the southeast that fell to the Taliban shortly before capturing Kabul, told AFP that the former insurgents’ behavior had far exceeded people’s expectations. Is soft

“But people are afraid of the bad economic situation,” he added.

However, many Afghans are scared and skeptical.

On Tuesday, a Taliban spokesman called on skilled Afghans to flee, saying the country needed “skilled” Afghans such as doctors and engineers.