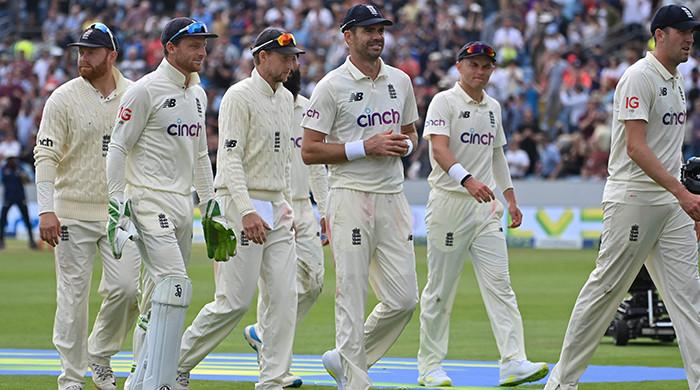 England great James Anderson broke the top order as India were all out for 78 on the first day of the third Test at Headingley on Wednesday.

Anderson took 3-6 in eight overs, including the award-winning wicket of India captain Virat Kohli who won the toss.

Both Sam Crane and Craig Everton took two wickets off two balls after lunch, Everton were called back in place of injured fast bowler Mark Wood after finishing 3-14 in 10.4 overs.

At lunch, India lost their last six wickets for 56-4, 22 runs, the innings was completed in 41 overs after just three hours of play.

This was India’s lowest Test score against England after being bowled out for 42 at Lord’s in 1974.

It was their lowest ever Test innings total of 36 against Australia in Adelaide in December – a series that India won 2-1.

Rohit Sharma (19) and vice-captain Ajinkya Rahane (18) were the only Indian batsmen to make double figures on Wednesday, with 16 runs in extras.

In response to the tea, England was leading 21-0, with Rory Burns (three not out) and Haseeb Hameed (not out 15) still unbeaten with a new opening partnership.

An unchanged India took a 1-0 lead in the five-Test series after a stunning 151-run victory at Lord’s last week.

England, on the other hand, recalled Everton after Wooden, joined by his teammates Quix Stuart Broad, Joffre Archer and Oli Stone.

Kohli won the toss and elected to bat, despite promising to help Anderson, who is already the most successful fast bowler in Test history.

But India saw Rahul and Rohit partnering to open a century at Lord’s, 1-1 off just the fifth ball of the day.

Anderson outscored several players who went too far and Rahul, who was fresh from his 129 at Lord’s, fell on the duck when he gave a quick drive to wicketkeeper Jose Butler.

Pujara often went for just nine balls on one ball, Anderson’s brilliant delivery ended it and both were off the pitch.

Anderson and Kohli exchanged angry words at Lord’s, after which England’s Tlander was hit by Jaspreet Bumrah’s bouncer barrage.

But there was little time for more ‘sledging’ as Kohli, without a Test century in two years and with an average of just 23 from January 2020, fell to seven when he tried to run Anderson’s ball. He may have defended Butler for a second catch.

Rahul, Pujara and Kohli could score only eight runs between them.

Oli Robinson hit when it became the last ball before lunch when Rahane (18) also fell behind.

Dangerous Rishbha Pant fell for just two runs, when he also became one of the five catches in Butler’s innings while playing a loose shot by Robinson.

Rohit, who scored 83 at Lord’s, fell the next time he made a looping bouncer error to Robinson from Everton at mid-on.

India were 67-7 on the next ball when Mohammad Shami, who had beaten England at Lord’s with a Test-best 56, was bowled out for zero when he pushed Burns into the slip.

Kran then LBWed the left-arm swing bowler with two off two balls, Ravindra Jadeja and Bumrah.

The innings ended when Mohammad Siraj was caught in the slip by England captain Joe Root at the hands of Overton.

One measure of England’s dominance so far was that Ishant Sharma gave up nine runs in his first over, while Anderson dropped more in his spell.