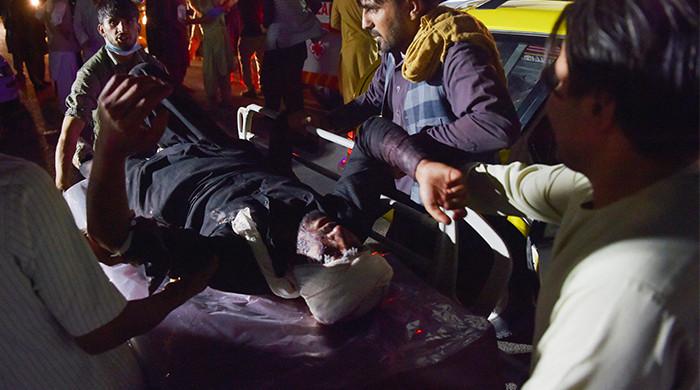 Two bomb blasts at Kabul airport on Thursday killed at least six people and injured dozens when Western nations warned of the threat of terrorism and as thousands gathered in hopes of a flight from Taliban-controlled Afghanistan. Happened

A Pentagon spokesman, John Kirby, said in a tweet that the “complex attack” near the airport had killed several Americans and civilians.

The blasts killed at least six people and injured more than a dozen, according to the city’s Central Emergency Hospital.

US President Joe Biden had earlier referred to the ISIS group’s regional chapter on the threat of “severe” terrorism.

One AFP In Kabul, a journalist saw smoke rising from a site near the airport.

An eyewitness said that when people heard the blast, there was complete panic. AFP On condition of anonymity

“I saw a man running with an injured child in his arms,” ​​he added.

The U.S. government and its allies sounded the alarm early in the day, warning its citizens to avoid the airport.

No details were given in the terror advisory, but Belgian Prime Minister Alexander de Cruz cited the threat of suicide bombers.

London also issued a warning to its citizens, saying “if you can get out of Afghanistan safely by other means, you must do so immediately”.

Pictures posted on social media, which could not be immediately confirmed, show the men taking the injured to a safe place in a wheelbarrow.

In another photo, a boy is seen holding the arm of a man whose clothes were soaked in blood.

More than 95,000 Afghans and foreigners have fled Afghanistan by US-led plane since the hardline Taliban movement took control of the country on August 15.

Despite growing warnings from the United States and terrorists, crowds of people eager to flee the Taliban continued to gather at the airport, ahead of the August 31 deadline set by Biden to end the withdrawal and withdraw. Became increasingly restless. Troops

Biden and his aides did not meet the deadline – even some foreign countries warned that they would be forced to leave endangered Afghans behind.

The Pentagon reiterated earlier Thursday that the operation would continue until the cut-off.

But many Western allies have already wrapped up their aircraft operations, including in Canada, whose government has said it is “really heartbreaking” to release those who want to save.

In recent years, ISIS has been responsible for some of the deadliest attacks in these countries. It has massacred civilians in mosques, shrines, public squares and even hospitals.

But it is appropriate to mention ISIS that the Taliban are rivals and they oppose each other.

The Taliban have promised a soft-brand rule since their first term in office, ending in 2001 when the United States invaded because they harbored al-Qaeda.

But many Afghans fear violent retaliation for working with foreign militants, Western missions or the former US-backed government, as well as the return of the Taliban government.

Some Afghans gathered outside the airport have foreign passports, visas or travel qualifications, but most do not.

Many people have been killed in the chaos around the airport in recent days.

Evacuating Kabul after the attack should be a priority

NATO Secretary-General Jens Stoltenberg said coalition forces should continue to evacuate as many vulnerable people as possible from Kabul, despite the fact that it carried out a “terrible terrorist attack”.

He tweeted after the two deaths, “Our priority is to get as many people as possible to safety as soon as possible.”

Belgium and the Netherlands have already stopped their flights at the airport, and other Allies have feared that those at risk will be left behind in the coming hours and days.

“Safe passage at the airport is important,” he tweeted.

The deadly blasts created “complete panic” among Afghans who had gathered outside in the hope of fleeing to safety, away from the country’s new Taliban rulers.

The men, dressed in blood-soaked clothes, were taken out of the scene in a wheelbarrow, while a boy grabbed the arm of a man with a head injury, in photos posted on social media.

“Bodies, flesh and people were thrown into a nearby canal,” said Milad, who was at the site of the first blast. AFP.

Another witness said that when people heard the blast, there was complete panic.

“I saw a man running with an injured child in his arms.”

Confused, he said he had left the documents he hoped would help him board the flight with his wife and three children.

“Everyone is worried and the army is taking up positions around the airport.”