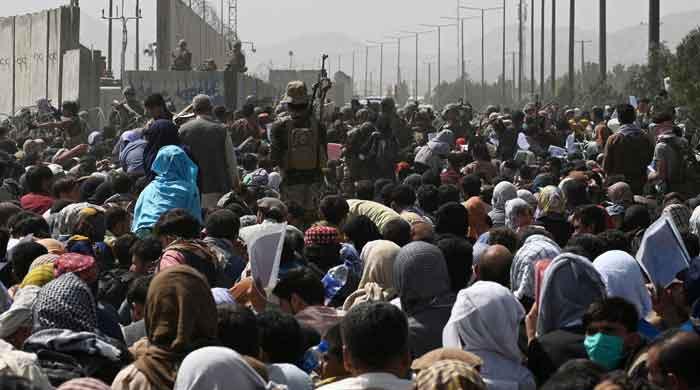 The United States and its allies on Thursday warned their citizens to leave Kabul’s Hamid Karzai International Airport immediately, citing a “security threat” as thousands of people fled the country. Trying to quit.

Since the Taliban took over on August 15, about 90,000 Afghans and foreigners have fled Afghanistan on US-led planes.

However, many are still left and huge crowds have gathered around the airport and some foreign presidents have called for the closure of flights before the August 31 withdrawal deadline set by President Biden. The cause is increasingly frustrating.

Biden set a Tuesday deadline to end the withdrawal and withdraw US troops monitoring it. One of the reasons for the tough deadline set by Biden and his colleagues this week was the “severe” security threat from the Taliban’s regional chapter.

The U.S. government and its allies sounded the alarm on Thursday with a series of warnings and coordinated and specific advice to its citizens to avoid the airport.

The Australian Department of Foreign Affairs has said that “the threat of a terrorist attack continues and is very high.”

“Hamid Hamid Karzai should not go to the international airport

London issued a similar warning, adding that “if you can leave Afghanistan safely in other ways, you must do so immediately.”

The Taliban have reportedly been involved in some deadly attacks in Pakistan and Afghanistan in recent years. The attacks have killed civilians in mosques, shrines, public squares and even hospitals in both countries.

The Taliban have promised a softer brand of governance than in their first term, ending in 2001 when the United States invaded Afghanistan and the Taliban sheltered al Qaeda.

However, many Afghans fear violent retaliation for working with foreign militants, Western missions or the former US-backed government, in addition to the Taliban’s brutal interpretation of Sharia.

“They have not only saved our lives, they have saved our dreams,” said a member of the girls’ robotics team after fleeing Afghanistan and landing in Mexico City.

“Under this (Taliban) government, we women will face difficulties,” she told reporters.

Crowds at the airport have caused chaos during the plane’s operation, with thousands of US troops trying to maintain a safe haven for evacuation flights.

Some Afghans gathered outside the airport have foreign passports, visas or travel qualifications, but most do not. At least eight people are said to have been killed in the chaos.

Taliban spokesman Zabihullah Mujahid said they had planes, they had an airport, they should evacuate their citizens and contractors.

Evacuation flights are coming to an end soon.

Turkey, which has more than 500 non-combat troops stationed in Afghanistan, said Wednesday that it has begun withdrawing its forces.

The evacuation signaled a clear abandonment of plans that Turkey had negotiated to help secure Kabul’s strategic airport after the US departure.

Belgium said on Wednesday that its military planes had flown about 1,100 people to the airport in recent days, including Europeans and Afghans. France has said it will end its flights on Thursday.

The Pentagon, which manages all of Kabul’s airports, has said it will have to end its withdrawal several days before August 31. Forces, as well as equipment.