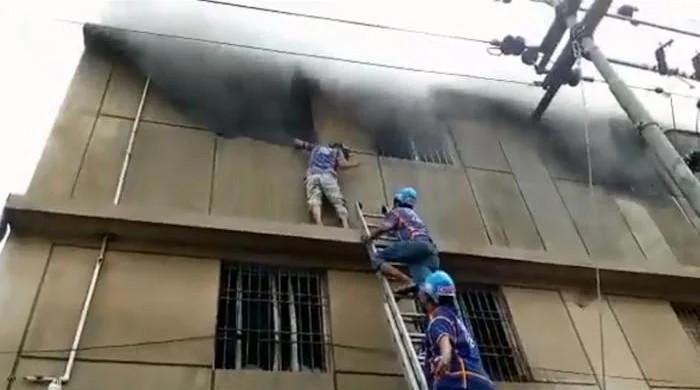 KARACHI: At least 15 people were killed in a fire at a chemical factory in Mehran Town on Friday, rescue officials said, according to Geo News.

The bodies of 15 workers have been recovered from inside the building so far and firefighters are conducting rescue operations. Many people are still trapped inside the factory.

The bodies have been shifted to Jinnah Postgraduate Medical Center (JPMC). According to the hospital administration, seven bodies have been identified so far, including Salman, Farman, Hassan, Ali and Farhan.

The administration added that Farhan, Ali, Farman and Hassan belong to the same family.

According to fire brigade officials, the fire broke out in a chemical drum and spread to other parts of the factory, during which the fire brigade arrived at around 10 am to put out the fire.

Rescue officials said they had asked for heavy machinery to break down the factory walls. It is being reported that they are facing difficulties in the rescue operation due to heavy smoke.

Two firefighters were also injured while trying to put out the blaze, Geo News reported.

In an update on the fire, Chief Fire Officer Mubeen Ahmed told Geo News that 13 fire tenders and a snorkel were being used to contain the blaze.

A rescue vehicle and a water board tanker were also present at the scene, he said.

“There is only one way to enter the factory,” the chief fire officer explained, adding that the roof of the factory was also closed, making it difficult for workers to escape.

The search for the victims continues, he said.

The fire has been contained and cooling is underway, he said.

According to eyewitnesses and workers, there were 25 workers inside the factory when the fire broke out.

“When we arrived in the morning with our four brothers, all four died during the incident,” he said.

Addressing Geo News. The worker said he did not know how the fire broke out in the factory. “We were not cooking and we did not see any short circuit,” he said, adding that some windows were open and the fire somehow got inside.

The reaction of the authorities.

Deputy Commissioner Korangi Samiullah Odho arrived at the scene five hours later. Odho said he arrived on the scene as soon as he was informed.

Highlighting the safety of factory workers, the deputy commissioner said, “I don’t know how many people died. I didn’t even know that the factory was in a residential building.”

However, he assured that he would investigate why the fire brigade did not arrive on time.

Reacting to the news circulating regarding the delay in the rescue service, Karachi Administrator Murtaza Wahab denied all the allegations.

“And as soon as we got there, the rescue operation started,” Wahab added.