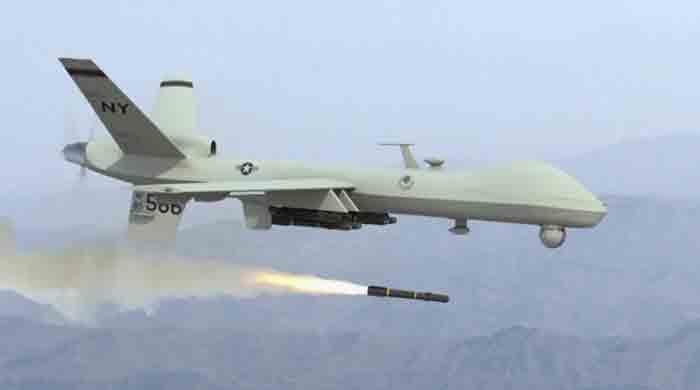 The United States carried out a drone strike against an ISIS in Afghanistan on Saturday, as a plane of people desperate to flee entered a final phase with the latest warning of terrorism and Taliban forces to seize Kabul airport. Prepared for

US forces monitoring the evacuation have been forced to work closely with the Taliban to prevent a recurrence of a suicide bombing that killed a crowd of civilians at a key airport gate and around 13 US troops. ۔

A regional branch of ISIS claimed responsibility for the attack, and the Pentagon announced that it had carried out a drone strike on a “planner” of an extremist group in eastern Afghanistan.

“Early indications are that we hit the target,” said Capt. Bill Urban of Central Command.

With the airlift window narrowing sharply ahead of the August 31 deadline, more than 5,000 people are inside Kabul Airport awaiting evacuation, and thousands are begging for entry.

The death toll from Thursday’s suicide bombing has further escalated tensions and tensions into a situation that is already rife with fear and frustration for those seeking to leave, and the onus is on US forces to secure the operation. There is danger.

The attack was followed by a series of dangerous warnings, and when a crowd gathered outside the airport on Saturday, the United States ordered U.S. citizens to leave the area around the main gates “immediately.” Issued a new warning.

The warning came hours after the Pentagon warned that the evacuation operation was facing “specific, credible” threats.

The Pentagon said in a statement that the bomber struck shortly after noon in front of a U.S. military base.

At the White House, Jane Sackie, President Joe Biden’s press secretary, said US national security experts believe another attack is “possible” and that the next few days will be “the most dangerous period ever.”

Taliban spokesman Bilal Karimi said on Twitter that the fighters had moved into parts of the military portion of Kabul airport, but the Pentagon withdrew. Kirby said the gate and operation were still being conducted by the US military.

In a major irony after two decades of war, the race to meet the August 31 deadline for US evacuation means closer evacuation movements and closer cooperation with the Taliban on the ISIS threat.

Rear Admiral Peter Wesley, the head of US forces at the airport, is in constant contact with the Taliban official who monitors security around the airport.

In most cases, US officials say, the Taliban have accelerated the entry of foreign nationals into the airport, Afghans have been granted US visas and even Afghans who have been involved in political or social activities or the media. Is facing threats from the Taliban for working for

Amid strong criticism at home and abroad for tackling the Afghan crisis and the withdrawal of US troops, Biden has vowed to stick to the airlift deadline and punish those responsible for the suicide bombing.

According to the US government, about 109,000 people have been deported since August 14, a day before the Taliban came to power.

Some Western allies, including Britain and Spain, announced earlier on Friday that they would withdraw their planes after other nations such as Canada and Australia.

The United Nations said on Friday it was ready for the “worst case scenario” for another 500,000 refugees from Afghanistan by the end of 2021.

The Taliban have promised a softer brand of rule than their first term in power from 1996 to 2001, which ended when the United States invaded Afghanistan after the September 11 attacks.

“They can work, they can study, they can participate in politics and they can do business,” he told a news conference.