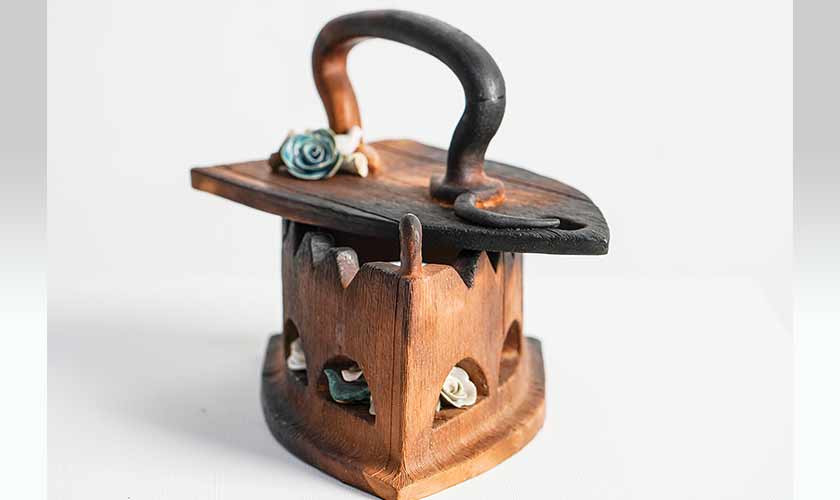 T.There is a clear conflict between stereotypes and reality, which is clearly illustrated by the clay statues of Jawariya Ahmed. The concept of domesticity is based on the current concept in its recent exhibition, I submit to your court, Produced by Saleema Hashmi, displayed at Zahoor-ul-Akhlaq Gallery, NCA, Lahore.

Messages delivered to us through five different tasks have different psychological implications and cultural values. Agit Prop shows that in the history of Eastern society, a woman’s decision is made from her home. Domestication and all its trappings are considered the axis of his life – his only purpose in life. Today, the basis for reaching the same decision is no different. This process reflects a psychological phenomenon that has more to do with jealousy and desire than with gender equality, as the perceived roles of men and women become more ambiguous. There are remnants of the past that lead to the present, revealing themselves in more subtle tactics that are less obvious to the naked eye. This is the Ahmadi ideological point, in all their great variations, check our repetition.

Archaeological records show that the production of clay models of buildings is thousands of years old. Jawariya Ahmed’s sophisticated concept means that her homes become individual and identifiable, reflecting the habits and personality of their occupants. Once Ahmed began to invent his work, it no longer serves as a mere verbal record but becomes an interpretation of the fact that, while acknowledging the validity of his commentary, maintaining these details, Chooses to invent or delete.

I Which can be a concern.Ceramicist chooses to arrange houses of different colors in a circle, which identifies different tribes, communities, ethnic groups or families, gathers one by one to decide the marriage of the girls. Jirga. The installation is a critique of attracting girls to their perceived role in society. Ahmed’s visual expressions of this critique are unique and aesthetically pleasing in ceramics.

Similarly, I Which may cause this concern II.The bright red houses arranged in a circle are a simple reminder of the games that young girls play, especially in rural environments, such as Kokla Chhapaki Jamiriat IJ.

Is Jawariya Ahmed a feminist who is questioning patriarchal dictatorship and chauvinism? Or is she a post-feminist, distancing herself from the radical prejudices of an extremist Orthodox? Like most contemporary beings, Ahmed distinguishes between these positions and discovers the middle ground in the process, which presents our collective conception of humanity – both its frustration and its amazement. Despite her critical stance, she is sometimes seen, reciting beautifully. His work is both humorous and serious, clever yet melancholy, doubling his criticism. In Western cultures, extreme perspectives are black and white, leaving no room for gray. Ahmed is gray, celebrates, is happy with the simple things of life, a cup of coffee to drink by hand. “I can validate and encourage the reaction of those who look beyond the surface to turn strength, power, perseverance, resources and boundaries into power,” explains Ahmed.

In the title of the installation. ChatThe work basically fits the city’s sophisticated style with hand-decorated stone cups that express a unique, later home style on the venerable traditions of the tea table. It brings together a body of work dedicated to tea and cups of tea everywhere. A familiar context for work is established by the fact that they are cups of tea. They traditionally belong to a familiar home environment where potters have always played a significant role in reflecting social fashion and culture by providing equipment for our cotyledon activities. The hand-fitting size of the pots reinforces the comfortable closeness of the home environment.

But this is where the comfort zone ends because none of these cups will ever contain any bodily fluids. With the negation of his T-time function, the installation marks a turning point where Ahmed has finally cut the umbilical cord with traditional household goods. What’s left is a hint of a culture of long conversation over a cup of tea. With this major shift in mindset, it seems more appropriate to review the show in terms of aesthetic conventions such as space, color, surface, expression, and content, as well as signs of conceptual concerns to extract significance and meaning.

Formal cups are neatly arranged in a circle that addresses psychological goals of a more spiritual nature. The meanings embedded in them are more secret and internal. There is no movement inside the form. Cups do not attack each other’s space. No cup is led and no other cup follows. If they communicate at all, it is through the parables that have been drawn on them.

Not all of Ahmed’s works deal with such issues. Some pieces are more processed, more straightforward, more artistic. They do not have the same harsh criticism as in the second series. In almost every case, Ahmed is careful not to use women’s bodies to ‘sell’ the work, except for the body object. In all his eloquence and eloquence, the subtle changes in Ahmed’s imagery, work and form are nothing but uniformity. For example, iron and cassette recorders, hand-woven terracotta and stoneware, in the ongoing series, House pieces.

Linked to the dynamics of this group’s conversation is another big concept of Ahmed’s show, Multiplication: How Numbers Affect Activity or Conversational Relationships. One of the psychological consequences of group dynamics that she seeks is that she uses color as a tool to make her point. The names of all the plates displayed in the installation, Which may be a concern III. Monochromatic, arranged in a long horizontal line, except for a red cup with a golden shiny house inside. The red glaze used is a startling red fire engine. The drawings on the plates have the appearance of classic black and white integral prints – dense yet transparent, illuminating detail and creating a sense of visual depth. Although aesthetically pleasing and eloquent, crows and birds of prey still make a restless and deliberate sense of hardship, restraint and end. Enhanced by the strict black and white color scheme, the paint surface image is freed from obstacles and boundaries, freely follow the form and care and get rid of the surface sculpture. The picture is a cross between charcoal drawing and oriental ink painting. The beauty and ease of Japanese brushwork differs from the soft velvet black and smoky gray color of the tonal and marking charcoal. Referring to the tea ceremony in honor of the guests who accept or reject the girl for marrying their son, the plates on the plates symbolize the guests who prey on innocent souls.

Just below the cup of red tea on the floor is an oval pool of red ceramic shards, which gives a new meaning to “home is where the heart is” as Ahmed gave a bleeding heart, or house, a soul to women. Leva multiplied.

As the work of Jawariya Ahmed matures, it is possible to speculate on the possibility of a newborn movement away from the glamor of clear attractions such as bright, vibrant colors. Perhaps indications of a move towards less solid properties are being shown in the inner nature of this group of cups in search of the essence of its objects: to peek down slowly, to be away. Perhaps the deepest virtue of Ahmed’s work is the wisdom of his basic warm, gentle nature. And her greatest achievement is that she has moved beyond stereotypes to reality, where she has found her truth – the discovery that there is a home.

The author is an art critic based in Islamabad.