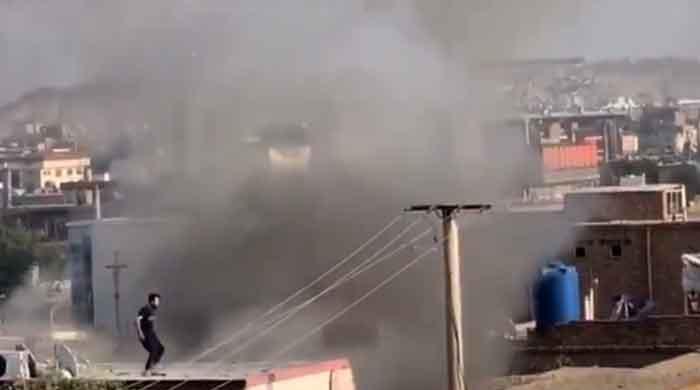 KABUL: The United States says it destroyed an explosive-laden car in an airstrike in Kabul on Sunday, just hours after President Joe Biden warned of another terrorist attack in the capital as thousands A major Afghan air flight entered its last days.

A Taliban spokesman confirmed the incident, saying a car bomb had been detonated for the airport – and possibly another strike from a nearby house.

The United States has said it only hit the vehicle, but added that secondary explosions had identified “substantial explosives.”

Local media have reported that there could be civilian casualties, which the United States has estimated.

The attack came as an ISIS suicide bomber targeted U.S. troops on Thursday, preventing large crowds from entering Kabul airport, from where the Taliban have returned to power since August 15. About 11,114,000 people have been evacuated since the arrival.

The attack killed more than 100 people, including 13 U.S. service members, and slowed down the airlift before Biden’s withdrawal deadline on Tuesday.

The operation is coming to an end despite the Western powers saying that thousands may be left behind.

US Secretary of State Anthony Blinken said about 300 Americans were still in Afghanistan seeking to leave the country.

“They’re not going to get caught,” he said. ABCHe added that the United States had “a mechanism to get them out.”

The Pentagon said Saturday that retaliatory drone strikes had killed two “high-level” ISIS militants in eastern Afghanistan, but Biden warned of more attacks by the group.

“The situation on the ground is extremely dangerous and the threat of terrorist attacks on the airport remains,” Biden said.

Our commanders informed me that there was a possibility of an attack in the next 24-36 hours.

The US Embassy in Kabul later issued a reliable threat warning at certain areas of the airport, including access gates.

In recent years, the local branch of ISIS has been responsible for some of the deadliest attacks in Afghanistan.

The ISIS attack has forced the US military and the Taliban to cooperate in order to ensure security at the airport, which was unthinkable two weeks ago.

On Saturday, Taliban fighters escorted Afghan passengers from buses to the main passenger terminal, handing them over to US forces for evacuation.

Troops were spotted in the urban area of ​​the airport grounds and adjacent buildings, while U.S. Marines looked at them from the roof of the passenger terminal.

After 20 years of war, the enemies were open to each other, only 30 meters away.

Pentagon spokesman John Kirby said US troops had begun withdrawing – without specifying how many remained.

Biden was on his way to an air base in Delaware on Sunday, where the remains of soldiers killed in Kabul were flown to attend a ceremony and meet with the victims’ families.

Most of the Western allies who helped the plane have already canceled their flights, expressing some frustration at not being able to put everyone at risk.

The head of the British Armed Forces, General Sir Nick Carter, said. BBC It was “shocking” that “we couldn’t get everyone out.”

A White House official said 2,900 people had been evacuated in the 24 hours between Saturday and Sunday, down from the beginning of the week.

Two Afghan athletes managed to leave last weekend and spent a week in France before being taken to Japan for a major global operation, the Tokyo Paralympics.

Zakia Khudadadi and Hussain Rasooli received an emotional welcome in the players’ village on Saturday night.

“Everyone in the room had tears in their eyes,” said Craig Spence, spokesman for the International Paralympic Committee.

French President Emmanuel Macron said talks with the Taliban had begun since Tuesday to “protect and repatriate” endangered Afghans.

He said France and Britain would urge the United Nations on Monday to work for the establishment of a “safe zone” in Kabul to secure humanitarian work.

The United Nations has said it is ready for the “worst case scenario” for another 500,000 refugees from Afghanistan by the end of 2021.

At the airport, thousands of people are circling, hoping to get on the plane.

The Taliban have now sealed off the roads leading to the facility and are only allowing approved buses to pass.