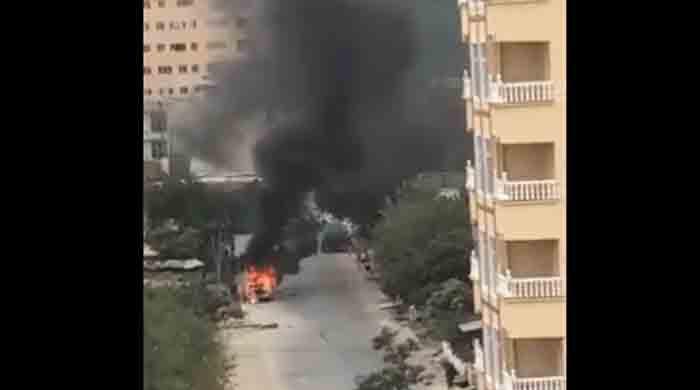 Washington: US President Joe Biden has been briefed on the rocket attack on Kabul airport and said “operations are going on without interruption”.

“The president was informed that the operation at HKIA (Kabul Airport) was continuing uninterrupted, and reaffirmed his order that the commanders redouble their efforts,” Saki said in a statement. To prioritize whatever is necessary to protect our forces on the ground. “

Earlier, rockets flew across the Afghan capital as the United States raced to complete its withdrawal from Afghanistan, the evacuation of civilians ended and the risk of a terrorist attack was high.

Biden has set a Tuesday deadline for the withdrawal of all US troops from Afghanistan, in the wake of his nation’s longest-running military conflict, which began in response to the 9/11 attacks.

The return of the Taliban government, which was overthrown in 2001 but returned to power a fortnight ago, began the evacuation of frightened people on US-led evacuation flights.

The flights, which evacuated more than 114,000 people from Kabul airport, will officially end on Tuesday when the final withdrawal of thousands of US troops will take place.

But US forces are now focused on getting themselves and US diplomats out safely.

The Taliban’s rival ISIS is the biggest threat to evacuation after a suicide bombing at the airport last weekend that killed more than 100 people, including 13 US soldiers.

Biden warned that more attacks were possible, and the United States said it had carried out an airstrike on a car packed with explosives in Kabul on Sunday night.

According to AFP reporters in the city, rockets were heard throughout Kabul on Monday morning.

According to eyewitnesses and security sources, several rockets were fired at the airport.

Smoke can be seen rising near the airport.

The sound of the airport’s missile defense system could be heard by locals, who also reported falling into the street – saying that at least one rocket had been intercepted.

A security official working in the former administration who was shot down by the Taliban said the rockets were fired from a vehicle north of the city.

A Taliban spokesman confirmed Sunday’s incident, saying a car bomb had been detonated for the airport and that the second strike may have been from a nearby house.

The United States has been accused of killing scores of civilians in airstrikes throughout the war, one of the reasons for the lack of local support, and it was likely again on Sunday.

“We are aware of reports of civilian casualties following a car bomb attack in Kabul today,” said Capt. Bill Urban, a spokesman for US Central Command.

The U.S. military is investigating whether civilians were killed, Urban said, noting that there were “powerful” explosions that resulted in car crashes.

“We are deeply saddened by any possible loss of innocent lives,” he said.

“He is in Kandahar. He has been living there from the beginning,” said Taliban spokesman Zabihullah Mujahid.

The deputy spokesman for the leader, Bilal Karimi, added: “He will appear in public soon, his whereabouts are mostly unknown.