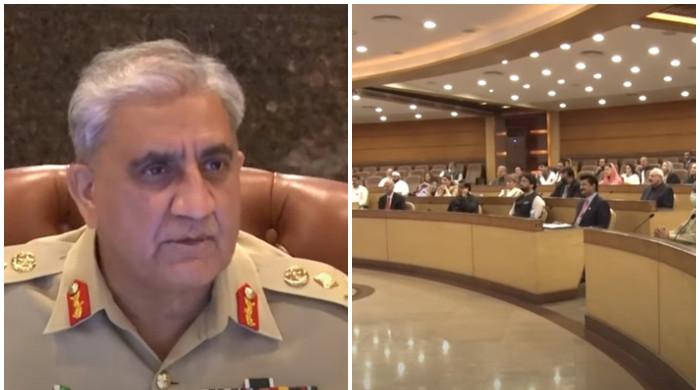 A delegation of three different parliamentary committees was briefed on Pakistan’s security situation, including the army’s efforts for peace and stability and the border situation, Inter-Services Public Relations (ISPR) said on Monday. ۔

The delegation visiting the GHQ included members of the Senate and National Assembly’s Kashmir Committee and Defense Committees, the ISPR said.

The development comes amid a rapidly evolving situation in Afghanistan, where many people fleeing the war-torn country have been allowed to stay in transit in Pakistan for up to a month.

In a meeting at the GHQ, the parliamentarians held a full interactive session with Chief of Army Staff (COAS) General Qamar Javed Bajwa, the army’s media wing said.

The Army Chief said that Pakistan’s Armed Forces with the cooperation of the nation have achieved unprecedented success in the war on terror and normalization in the country.

“Due to our timely steps for Western Zone Border Management, despite the challenges, Pakistan’s borders are secure and we are ready to deal with any situation,” the Army Chief said.

In addition to the benefits of regional connectivity, COAS highlighted the importance of restoring peace in Afghanistan for the region’s sustainable development.

The Army Chief reiterated the support and commitment of the Pakistan Army for the Kashmir cause and the Kashmiri people.

The Army Chief said that the world should know that peace and stability would not be possible without a peaceful solution to the Kashmir issue.

The army’s media wing added that the session ended with a consensus and determination to continue the fight against violent extremism with the entire nation.

An in-camera meeting of the Parliamentary Committee on National Security, which took place in Parliament House in July, ended with parliamentarians expressing satisfaction with the briefing provided by the country’s security apparatus.