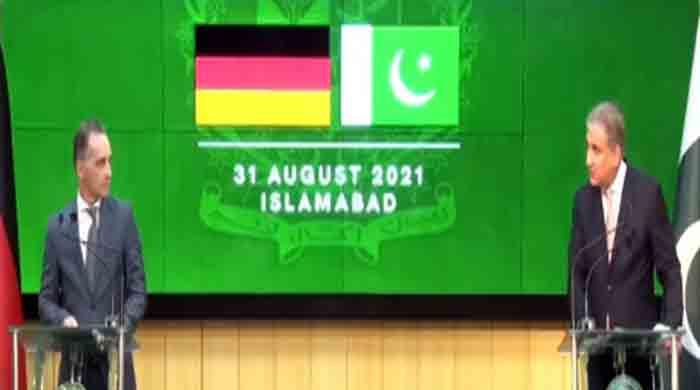 ISLAMABAD: Foreign Minister Shah Mehmood Qureshi on Tuesday urged the international community to remain engaged with Afghanistan after ending its military mission in the war-torn country.

Addressing a joint news conference in Islamabad with his German counterpart Heiko Moss after the delegation-level talks, FM Qureshi said, “We expect a united government to be formed in Afghanistan in the coming days. Will

He added that Pakistan was already hosting 3 million Afghan refugees and providing them with all facilities, including health, education and more.

“Pakistan has kept its borders open. People are traveling between the two countries and trade is going on,” he said.

Calling on the international community to extend all possible assistance to Afghanistan, Foreign Minister Shah Mehmood Qureshi said that Pakistan wanted to see a stable, prosperous and progressive Afghanistan.

On the other hand, the German Foreign Minister welcomed the recent statements of the Afghan Taliban in which they promised revenge and assured the maintenance of human rights in the country.

Haas said it would be better if a broad-based government was formed in Afghanistan.

He said the situation in Afghanistan had changed “dramatically”, adding that Pakistan had helped evacuate citizens from Afghanistan, Germany and other countries.

“I have spoken to Foreign Minister Shah Mehmood Qureshi on the issue of Afghanistan,” he said. We want to thank Pakistan for expelling German citizens.

US Secretary of State Anthony Blankenship said Tuesday that the United States expects the Taliban to live up to its promises as US troops withdraw from Afghanistan, but that any justification or support will be needed.

The top US diplomat said just hours after the last US evacuation flights left Kabul that Washington had suspended its diplomatic presence in Kabul until Monday and shifted its operations to Qatar.

“Our troops have left Afghanistan,” Blanken said. “A new chapter in America’s engagement with Afghanistan has begun.

“This is where we will lead our diplomacy. The military mission is over and a new diplomatic mission has begun.”

Blinken said the United States is committed to helping any American who wants to leave Afghanistan to leave the country.

He said a small number of Americans live in the country – “less than 200” but possibly only close to 100 – and want to leave.

Blinken said the Taliban would need to live up to its promises to provide freedom of movement, respect the rights of women and minorities, and prevent the country from becoming a base for terrorism.

“Any legal status and any help is needed,” Blinken said.