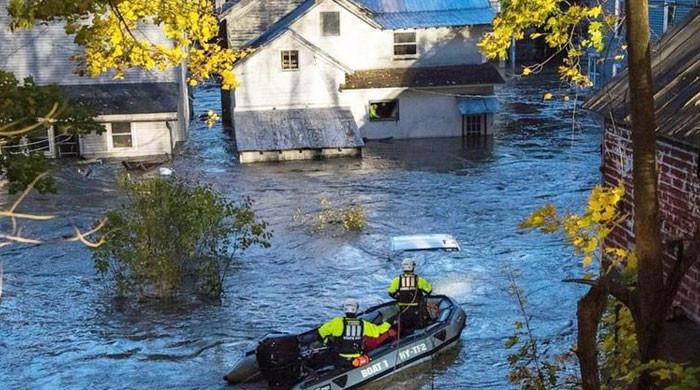 NEW YORK: Flash floods caused by the remnants of Hurricane Ida killed at least 25 people in the New York area as of Thursday night, including several who were in their basement during a “historic” weather event. Were killed by authorities accused of climate change.

“Living in the jungle was like a tropical rain. Incredible. Everything is so weird this year,” he told AFP.

Hundreds of flights were canceled in La Guardia and JFK airports, as well as in Newark, where the video showed the terminal in rainwater.

“We are all together. The nation is ready to help,” President Joe Biden said ahead of a visit to the southern state of Louisiana on Friday, where Ada first destroyed buildings and cut off power to more than a million homes. ۔

The floods closed major roads in many parts of New York, including Manhattan, the Bronx and Queens, submerged cars and forced the fire department to rescue hundreds of people.

Twelve people were killed in New York City, including 11 who could not escape from their basement, police said. The victims ranged in age from 2 to 86.

“These are the working class, immigrants, and low-income individuals and families,” he added.

A spokesman for the mayor said ten more people had died in New Jersey, four of them in an apartment.

A local official confirmed that three people had also died in Montgomery County outside of Philadelphia.

Ida wreaked havoc in the north after entering Louisiana over the weekend, causing severe flooding and tornadoes.

State Emergencies were declared in New York and New Jersey, while the National Weather Service issued an emergency flash flood warning for New York City for the first time, urging residents to move to higher ground.

The New York branch of the National Weather Service (NWS) said in a tweet that “you don’t know how deep the water is and it’s very dangerous.”

The NWS recorded 3.15 inches (80 mm) of rain in just one hour in Central Park – a record set during Hurricane Henry last month.

The US Open was also stopped because of wind and rain from the corners of the roof of Louis Armstrong Stadium.

– Danger of a tornado

New York woke up on Thursday to clear the blue sky when the city returned to life but the traces of last night’s massacre were not far away: residents moved falling tree branches off the streets as subway service slowly began. ۔

Such hurricanes are rare to hit the northeastern United States and are caused by warming sea levels due to climate change.

Scientists say the cyclones are becoming more powerful and carrying more water because of the heat, which is a growing threat to the world’s coastal communities.

“Global warming is upon us, and unless we do something about it, it’s getting worse,” said Democratic Senator Chuck Schmidt.

In Annapolis, 30 miles (50 km) from Washington, a tornado tore down trees and knocked down a power pole.

The NWS warned that the hurricane threat would remain, with tornado clocks in place in southern Connecticut, northern New Jersey and parts of southern New York when Ida explored the north via New England on Thursday.